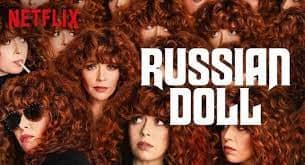 A dark comedy series created by Natasha Lyonne, Amy Poehler, and Leslye Headland, Russian Doll has been nominated for an Emmy Award. With its premiere on Netflix in February 2019, the series immediately proved popular with subscribers and critics.

Russian Doll fans got to experience another life-bending event over the weekend centered around the birthday of Nadia Vulvokov (series star, writer, director, and co-creator Natasha Lyonne).

As season 3 of Russian Doll hasn’t been commissioned yet, it’s impossible to tell when the show might appear on Netflix. Season 1 premiered in February 2019, and season 2 followed in April 2022, so we may have to wait three years before seeing Nadia and Alan again.

Who Will Appear in Russian Doll Season 3?

There is no doubt that if the Russian Doll does make a comeback, Natasha Lyonne will return as wise-cracking lead Nadia Vulvokov.

Also, Charlie Bennett is likely to return in season three as Alan, barring another death time loop.
In the movie, Nadia would not be complete without Maxine, played by Greta Lee, as her sweet birthday baby bestie.

In addition, there’s the mysterious homeless man Horse (Brendan Sexton III), who constantly appears when things get weird and (time)loopy.

Aside from that, the fate of the cast depends on the passage of time – with adventures into Nadia’s past possibly reviving the young Aunt Ruth (Schitt’s Creek’s Annie Murphy), the late Aunt Ruth (Elizabeth Ashley), and her absentee tearaway mother (Chloe Sevigny in the 1980s).

What Would Be the Plot of this Season?

In Russian Doll, the past two seasons work as standalones, but when put together create a bigger picture.

Since season two also ended with a fully-rounded moment, it is likely that season three will continue with Nadia time-traveling.

The future – as with Nadia’s – is unclear. But we are eager to see what it brings.

This first season focused on a time loop set firmly in the present day, in which Nadia and Alan’s respective deaths recurred over and over again until they were able to figure out how to break it.

During season two, Nadia learned (and became) both her mother and grandmother at different times.
So, we could theorize that season three will take place in the future, which was touched on in season two but not the main storyline.

Upon being asked by Variety if this could be the case, Lyonne replied, “That thought has occurred to me as well. The show is always going to be a philosophical, psychedelic meditation on the nature of time, mortality, etc.”

One of the first things that come up in season two is Carlo Rovelli, an Italian physicist who suggests that we can remember the past, but we can’t remember the future. It raises some really big questions. And who knows? Who knows if they’ll ever let me do this again?”

Nadia also struggled with Ruth’s slow death throughout the season, as she was so preoccupied with changing the past that she missed her death.

Certainly, she had said goodbye to Ruth’s younger version in the past, but not to her own.
In the aftermath, Lyonne said that Nadia had no choice but to lose Ruth, but if season three is released, we may learn what happened to her after all.

“It was essential that, in a strange way, by Nadia not getting exactly what she wanted with Ruth, this other deeper thing could happen: Ruth doesn’t hold that against her,” she explained.

A true unconditional love is also the idea that you forgive your flaws as a person. Ruth knows Nadia well enough to realize she is showing up in her own way, but since you have been breaking season three, perhaps she will get to say goodbye.”

Eternals 2 Release Date: Which Eternal is the Strongest?