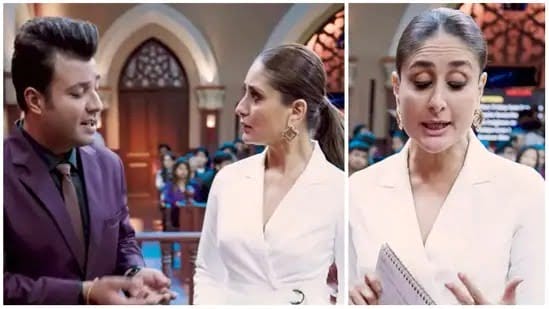 What did Kareena say to Varun Sharma? The actor left the show midway

Actor Varun Sharma shared the clip and wrote, ‘Sikhs were not alive, I was just saying. Now I will stop. In the video clip, Kareena Kapoor is seen wearing a white pantsuit holding a pan. Kareena Kapoor is complaining about Sunny Deol’s famous dialogue in the clip. Even though the case was filed day after date, there was no justice.

Varun Sharma, who became Kareena Kapoor Khan’s lawyer, explained to him how to get justice? On every date, you are busy running errands, sometimes in the parlor and sometimes in appointments with the designer. In response to Varun Sharma’s words, Kareena Kapoor said in her famous dialogue from her film ‘Job We Met’, teach me now? I am Sikh, I know all about Bathinda.

Kareena Kapoor said, ‘From catching the train to winning the case. Then Varun Sharma quit the case midway, what do you need from me. Apart from Varun and Kareena, Riteish Deshmukh will be seen playing the role of a public advocate in the show Case To Banta Hai. While Kusha Kapila will play the role of a judge, Sanket Bhosle, Sugandha Mishra, Siddharth Sagar, Paritosh Tripathi will play the role of a witness and will make you laugh.