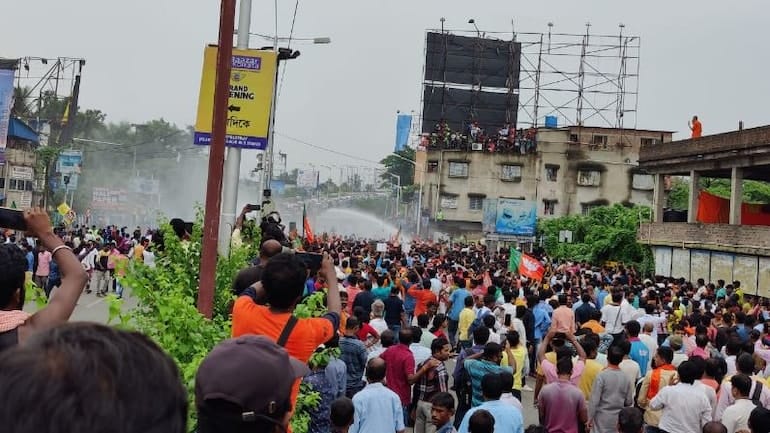 Several BJP leaders Detained During Protest in West Bengal, including Leader of Opposition Suvendu Adhikari detained by police when they were marching to state secretariat ‘Nabanna’ in Kolkata, as part of a huge protest against the alleged corruption by the ruling Trinamool Congress government.

Police stopped BJP workers’ vehicles in many places such as Haldia and Nandigram. As per the BJP’s plan, rallies from three points will try to reach Nabanna, the state secretariat.

Adhikari was set to lead a rally from Satraganchi, while party state chief Sukanta Majumdar is to lead one from Howrah Maidan. Former state BJP chief Dilip Ghosh will lead workers from College Street. The last time the state BJP carried out such a large-scale campaign was in 2020.

Security arrangements were beefed up in Kolkata as BJP supporters from across West Bengal started arriving in the state capital and neighboring Howrah on Tuesday morning, with heavy barricading at Hastings near the state government’s new Secretariat. Traffic restrictions have been put in various places along with several key stretches of the city.

Police also use water cannons and tear gas shells to stop and disperse BJP workers in the Santragachhi area of Howrah, amid their call for the Nabanna Chalo march.

They were stopped in front of the police training school at the approach to the Second Hooghly Bridge near the secretariat.

The four BJP workers were arrested before boarding the train at Panagarh station. BJP workers have alleged that the police are selectively arresting only BJP workers and supporters after entering each train station.

“The TMC government is scared of a public uprising. Even if they try to stop our protest march, we will resist peacefully. The state administration will be responsible for any untoward development,” Mr. Ghosh had said earlier today.