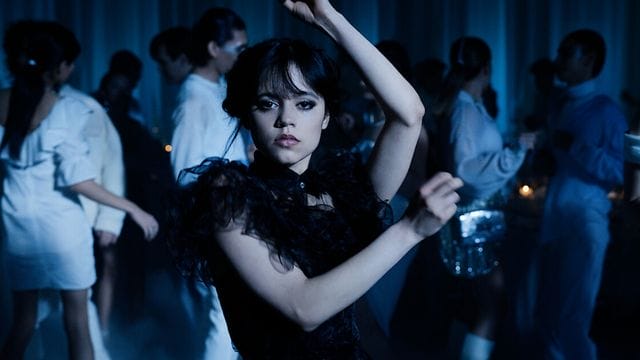 If there is one scene from the blockbuster new Addams Family series Wednesday that has truly gone viral, it is the dance scene in episode 4.

The sequence, which takes place at the annual Rave’n dance at Nevermore Academy, has gone viral on TikTok, with admirers attempting to imitate star Jenna Ortega’s skills. However, it turns out that Ortega had no idea what she was going to perform in the sequence until immediately before it was shot.

Ortega recounted a chat she had with executive producer and director Tim Burton about the moment and how it led to the dance coming together on The Tonight Show with Jimmy Fallon.

She stated: “He came to my trailer two days before the shoot and said, ‘Hey Jenna, so I know you said you wanted to choreograph this yourself,’ since I refused to see a choreographer. ‘I know you’ve got it, you’ve been working on it, I’m not even worried about it,’ he said. ‘I have faith in you.'”

Ortega went on: “‘Oh, yeah,’ I said. It’s all so lovely, you know.’ And I hadn’t gone over it once. That week, I was doing cello and fencing. I simply did not have the time.

“I was cursing myself because I felt like such a fool. I’m not a dancer, I don’t do anything like that, and I have no experience in the sector. I didn’t sleep for two days after that.

“I watched Siouxsie and the Banshees and Denis Lavant in Beau Travail videos. I discovered an archive film of goth kids dancing in 1980s clubs. I was looking at Lene Lovich, Nina Hagen, and everything else I could get my hands on, and then one day I decided, ‘All right, well, let’s just see what happens.'”

As it turns out, what occurs is an instantly memorable scenario that people seize on right away.

Wednesday’s second season has yet to be officially confirmed, but Netflix’s head of US and Canada scripted series, Peter Friedlander, told Variety that he was “optimistic” about another season.

He stated: “You may have guessed what I’m going to say, but I have nothing to confirm at the moment. I’m looking forward to Wednesday. We’ll leave it there.”

Wednesday is now available on Netflix.

Netflix Renews “The Witcher,” and Liam Hemsworth Takes Over the Role of…