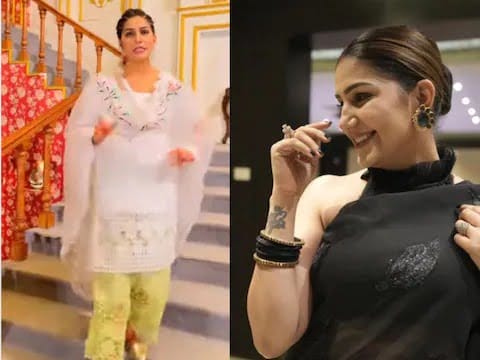 Sapna Choudhary latest video.Not only in the country but all over the world there are people who like the famous Haryana dancer Sapna Choudhary. No one doubts that Swapna popularized Haryana’s folk songs and styles across the country due to her catchy dance moves.

Sapna Choudhary’s stage show was attended by a huge crowd. Dancers famous for dancing are also quite active on social media. Sometimes she entertains her fans by sharing her glamorous pictures and sometimes her videos. Swapna’s latest video is going viral on social media.

Swapna Chowdhury is facing arrest, but Haryana’s dancing queen has shared a new video of her on Instagram regardless. Swapna was seen recreating Deepika Padukone’s dialogue in the video, which saw fans start appreciating the dancer once again.

Sapna choudhary say, ‘Not easy at all’.

In fact, Bollywood actress Deepika Padukone’s alleged dialogue reel in ‘Happy New Year’ was made by Swapna Chowdhury. In this he said, ‘Mohini’s dance seems easy, not easy. Dance is worship, dance is an art’. In this video, Swapna is seen wearing a white and lemon palazzo suit. Sharing this video, Swapna wrote, ‘It’s not that easy’.

Earlier, Swapna Chowdhury shared a video on her Instagram, showing a huge crowd on the stage to see Swapna. Only people are visible where the camera pans.

We tell you that the ACJM court in Lucknow, the capital of Uttar Pradesh, on Monday issued an arrest warrant against dancer Swapna Chowdhury for canceling the dance show and not refunding the money to the ticket holders.

Eye or kidney… Rakhi Sawant’s big announcement – I will donate this organ, you will be shocked to hear it

If your feet are swollen after hours of sitting at the office, this home remedy will provide relief