Ved Box Office: The Riteish Deshmukh-starring Picture Surpassed Sairat as the Highest-grossing Marathi Film With a Total of 44.9 Crore!!

Riteish Deshmukh's first film as a director, Ved, has been doing well at the box office since it came out on December 30. It has made 44.92 crore since then, making it the second-highest grossing Marathi film after Sairat (2016). 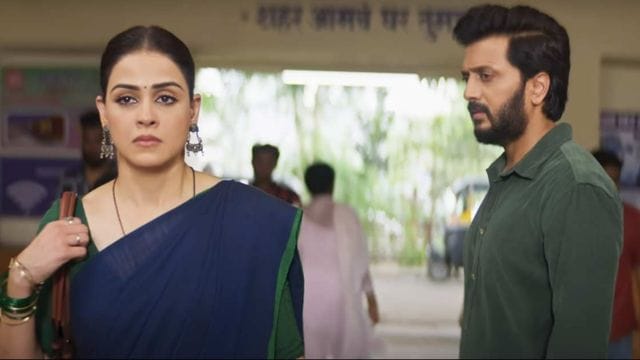 On December 30, Ved, Riteish Deshmukh’s first Marathi movie as a director, came out. It was a hit at the box office and got the actor praise for his acting and direction. He also stars in the movie with his wife, Genelia D’souza, who is also an actor.

So far, Ved has made 44.9 crore, which makes it the second-highest-grossing Marathi film of all time, right behind Sairat, which came out in 2016. On Saturday, Ved made 2.72 crores, and it’s likely to do the same on Sunday.

The 2019 Telugu film Majili, which Riteish Deshmukh’s movie Majili is a remake of, has been doing well at the box office. Taran Adarsh, a trade analyst, says that the Marathi movie Ved has made a total of 44.92 crores in its third weekend in theatres. In its first two weekends, it made 33.42 crores.

Ved, which reportedly cost around 15 crores to make, is not only making money but also breaking many box office records for Marathi movies.

Taran tweeted on Sunday, along with Ved’s box office earnings, “The Marathi movie Ved has now made more money than any other Marathi movie except for Sairat. As expected, business doubles on the third Saturday compared to Friday, and you can expect big gains again on Sunday… This one won’t slow down… [Week 3] 1.35 crore on Friday and 2.72 crores on Saturday. Total: ₹44.92 crores.”

In addition to Riteish and Genelia, Salman Khan also shows up in Ved. He can be seen in the song Ved Lavlay. Genelia speaks Marathi for the first time in the movie. Genelia and Riteish were also in the comedy Mister Mummy, which came out on November 18 of last year.

After making a comeback to acting, Genelia is said to be planning to make a comeback to Telugu cinema with an untitled film starring Kireeti, the son of the former minister of Karnataka, Gali Janardhan Reddy. Radha Krishna will direct the movie, which will be in both Telugu and Kannada.

Next, Riteish will be seen with Sonakshi Sinha and Saqib Saleem in the upcoming horror-comedy Kakuda and with John Abraham, Nora Fatehi, and Shehnaaz Gill in Sajid Khan’s comedy 100 percent.

Raha Kapoor’s Mom Alia Bhatt Says Her Cat Edward is Ignoring Her and Shares Photos of a “Not So Happy Sunday.”