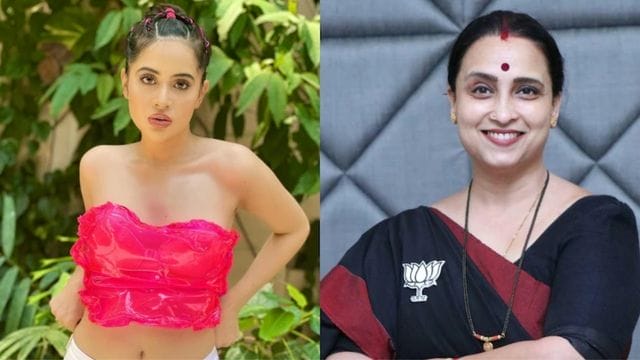 The social media feud between Urfi Javed and BJP leader Chitra Wagh does not appear to be going away anytime soon. Urfi Javed has dropped another sarcasm bomb on Chitra Wagh, State President of the Mahila Morcha of the BJP in Maharashtra.

Urfi Javed, who has added an O to her name and spells it Uorfi Javed, has taken aim at the BJP and Chitra Wagh in connection with the Kanjhawala hit-and-run case in Delhi. “…Mrs Chitra Wagh, one of the accused belongs to your party, I would love to see you raising your voice here!” she wrote on her Instagram story.

Urfi Javed had mocked Chitra on Twitter the day before. “Happy New Year everyone except Chitra Wagh,” she wrote.

What Actually Occurred Among Urfi Javed and Chitra Wagh?

Chitra Wagh filed a First Information Report (FIR) against Urfi Javed, claiming Urfi of spreading public nudity on the streets of Mumbai. Urfi is infamous for underdressing the paparazzi and for transforming commonplace objects into dresses. She releases one outfit per day and instantly becomes one of the most-searched celebs on the internet.

First, Wagh released a video of Urfi Javed wearing a black blouse with cutouts and trousers exiting a car. Wagh wrote, “What’s occurring in Mumbai? Does the Mumbai Police have any IPC/CRPC provisions to restrict this woman from engaging in open nudity on the city’s streets? Quickly place her under arrest.”

Wagh said that on the one hand, perverts were preying on innocent girls and women, and on the other hand, Urfi was “spreading more perversion.”

Urfi Javed was quick to respond and lashed out against Chitra, claiming that politicians like her impede the protection of women.

“Why don’t you do anything to assist women in need, Janata, if you can only deflect attention away from yourself by using me? Education for women, tens of millions of pending rape cases? Why don’t you?” Urfi said.

Then, Javed attacked Wagh on her Instagram stories, demanding that she reveal the specifics of her and her family’s holdings. Urfi said on her blog: “Inform the public about a politician’s income and source. Also, on occasion, numerous males in your party have been accused of harassment, etc., but I’ve never seen Mrs. Chitra Wagh do anything about it.”

Urfi did not delay in responding to the FIR lodged against her. She stated that no provision of the constitution could put her in jail. According to her, vulgarity and nudity are defined differently by different people. Urfi wrote, “You cannot send me to jail unless my nipples and vagina are seen.”

Former Bigg Boss OTT participant Urfi Javed had been pulled into a fight with another individual before. A few days ago, Urfi had an altercation with the author Chetan Bhagat. In one of his sessions at Sahitya Aaj Tak, Bhagat urged young people not to watch Urfi Javed; Urfi subsequently responded to Bhagat by levelling #MeToo allegations against him.