Uorfi Met With Javed Akhtar Said He is “A Legend”, Shared a Pic With Him! Watch!

Javed Akhtar and Uorfi Javed met not too long ago. She posted a picture of them together on Instagram with a funny caption that called him her "grandfather." 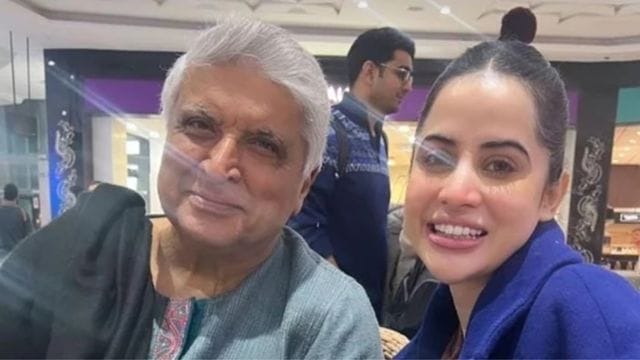 Uorfi Javed had a fashion show in Delhi. On Sunday, the actor and social media star posted a picture of herself with Javed Akhtar, which was likely taken in Delhi. Uorfi posted a picture of the two of them on Instagram and said that the lyricist was “a legend.” She also made a joke about meeting her grandfather for the first time.

Uorfi sent Javed a picture of herself through Instagram Stories. Uorfi, who is often in the news because of what she wears, was wearing a blue overcoat. Javed, on the other hand, was wearing a grey kurta with a black shawl. In the picture Uorfi shared, they were smiling and looking into the camera.

She wrote next to it, “Finally met my grandfather today. Also he is a legend, right in the morning so many people lined up for selfies, but he did not refuse anyone, chatted with everyone with a smile. He was so warm! I am in awe.”  She put a rose, a laughing face, and a heart in her caption.

During her recent trip to Delhi, Uorfi joked that she was “allergic to clothes” and that woollens made her break out in boils. She even asked her Instagram followers if they had the same problem in the winter in a poll. Uorfi showed the boils on her body on Instagram Stories. Uorfi posted a second video of herself talking about her allergy.

“Alright, now you know why I don’t wear clothes. I have a serious condition that makes my body act up. There is proof, and it’s right there. That is why mai itna nangi rehti hoon (I am often naked). My skin reacts badly to clothes.” In another clip she posted, Uorfi said, “The allergy is literally so bad! This just happens when I wear woollen clothes. I have a bad reaction to clothes.”

Uorfi’s strange clothes are often in the news. Chitra Kishore Wagh, who is the president of Maharashtra Mahila Morcha, recently filed a police report against her. She said that the actor’s clothes were vulgar and a threat to society. She had also asked for Uorfi to be caught.

Urfi Javed is known for the clothes she makes on her own. She never fails to shock her fans with her daring choices of clothes. Urfi was on Rithvik Dhanjani’s show, Datebaazi, not too long ago. People also like her because she was on the MTV show Splitsvilla.

Honey Singh has recently said nice things about Urfi and hinted that the two could work together in the future. When asked if fans would ever get to see Urfi in one of Singh’s future music videos, he gave a positive nod and told Filmibeat, “Haan definitely agar koi gaana badhiya sa bana jisme mujhe lage ki woh Poora accha nibha sakti hain toh definitely, why not? I’m wishing her all the luck and support.”