While in Vrindavan, Anushka Sharma, Virat Kohli, and Vamika Kohli visited an ashram. They all gather in one video to say a prayer. 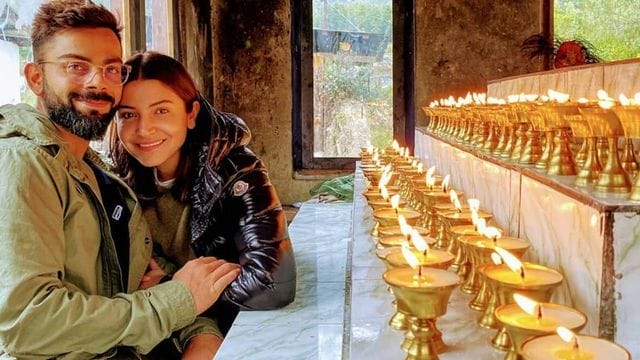 Virat Kohli and Anushka Sharma recently went to Vrindavan to see Baba Neem Karoli’s ashram. When they went to the ashram to pray, their daughter Vamika Kohli joined them. A video of the family that had never been seen before has shown Vamika being blessed.

In the video, emojis cover every part of Vamika’s face that can be seen. It starts with Anushka sitting next to Virat with Vamika on her lap. The family put their hands together and asked the priest to bless Anushka. The priest also put a veil around her. He also blessed little Vamika.

Virat Kohli finally picked up Vamika in his arms. Anushka, on the other hand, bowed and folded her hands well once more. Anushka wore a black jacket with a white cap and a floral scarf. Vamika wore a white dress. Virat wore a black cap and black pants with an olive green jacket.

In response to the new video, a fan wrote “God bless this family” in the comments section. “Vamika is so adorable,” said someone else. Several pictures of Anushka and Virat from the ashram had been seen before, but none of them showed Vamika.

The couple got to Vrindavan on Wednesday morning, according to a report in India Today. They gave away blankets. At the ashram, they were said to have also meditated for an hour. The two people seem to have a lot of faith in Baba Neem Karoli.

Anushka and Virat just got back from Dubai, where they met up with Vamika to celebrate the New Year. Virat put their pictures on Instagram and wrote “2023” with a red heart emoji next to them. Anushka finished filming for her upcoming movie Chakda Xpress before going to Dubai.