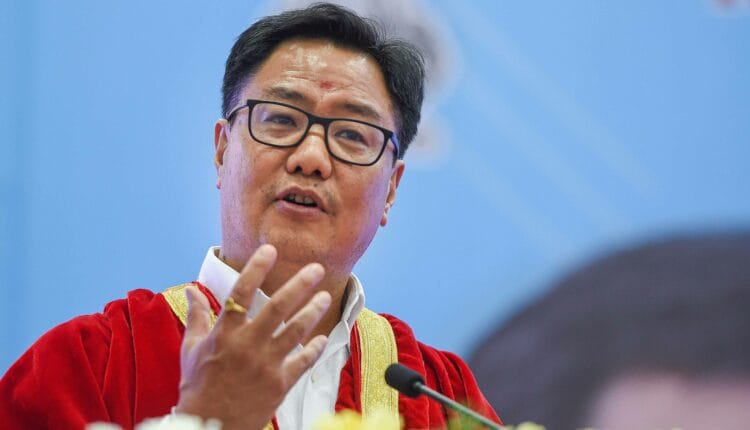 The comment from Union Law Minister Kiren Rijiju comes amid ongoing disputes over the Collegium system between the executive branch and the judiciary.
In the midst of the ongoing dispute between the government and the judiciary, Union Law Minister Kiren Rijiju stated on Monday that although judges are not required to run for office or submit to public scrutiny like politicians, they are nonetheless held accountable for their decisions and acts.
“You are being scrutinized and judged by the public. Your decisions, your method of operation, the way you administer justice… You can’t hide anything in the social media age “Rijiju spoke during cheers from the audience at a Delhi Bar Association function.

“After becoming judges, they are exempt from elections and public scrutiny… The law minister remarked, “The public is observing the judges, their decisions, and how they administer justice and make their assessments.

Rijiju’s statement comes amid ongoing disputes over the Collegium system between the administration and the court. In a recent statement, Rijiju stated that the Centre had a “bounden duty” to implement the Supreme Court’s 2016 judgment to restructure the Memorandum of Procedure (MoP) for the appointment of judges to the Supreme Court and the High Court.

Rijiju added that the judiciary’s independence is “very vital” for a robust democracy and that the Center respects it. Rijiju expressed worry that some are, nevertheless, making remarks or statements in this regard that will only harm the institution.

#WATCH | "After becoming judges, they don't have to face elections or scrutiny by the public," says Union Law minister Kiren Rijiju pic.twitter.com/4aLPjLoGrk

He stated that over the past few days, he had observed several remarks made by notable individuals, notable lawyers, and even retired Supreme Court justices who we anticipate would have a favorable impact on the development of the country.

Rijiju attempted to bolster the assertions made on Sunday by a former high court judge who said that by choosing to nominate judges on its own, the Supreme Court had “hijacked” the Constitution. Former Delhi court judge Justice RS Sodhi was interviewed in a video that Rijiju uploaded, claiming that it was the “voice of a judge” and that the majority of people shared his “sane views.”

The names of two attorneys for appointment as judges of the Calcutta high court were recently restated by the Supreme Court collegium for the second time, stating that it was not acceptable for the government to keep sending back the same proposal.