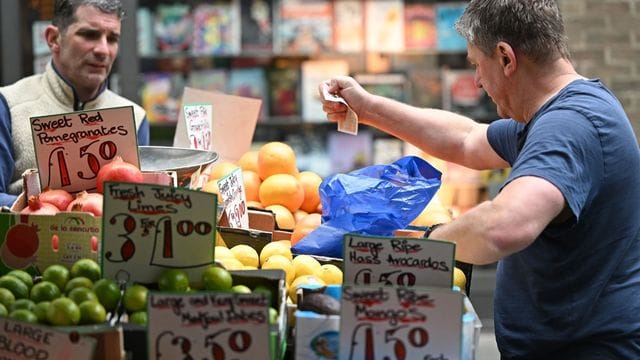 Inflation in the U.K. came in at 10.7% in November, which was a little lower than expected. Falling fuel prices helped ease price pressures, but high food and energy prices still made it hard for households and businesses.

After an unexpected jump in October to a 41-year high of 11.1%, Reuters polled economists and found that they thought the consumer price index would rise by 10.9% annually in November. On a monthly basis, the increase in November was 0.4%, which was less than the consensus estimate of 0.6% and down from October’s increase of 2%.

The Office for National Statistics said that housing and household services (mostly electricity, gas, and other fuels), as well as food and non-alcoholic beverages, were the biggest contributors to price increases.

On Thursday, the Bank of England will say what its next move will be in terms of monetary policy. As it tries to deal with sky-high inflation and an economy that policymakers say is already in the longest recession on record, it is likely to raise interest rates by 50 basis points.

During the Christmas season, there will be a lot of strikes because workers want pay raises that are closer to the rate of inflation and better working conditions.

In 2022-23, real household income is expected to drop by 4.3%, according to the independent Office for Budget Responsibility. This is the largest drop in living standards since records began.

Even though the drop in Wednesday’s numbers is a step in the right direction, Richard Carter, head of fixed interest research at Quilter Cheviot, said that rising food prices and energy bills are still a problem for the British economy.

But Carter said that inflation may have finally reached its peak because the U.S. CPI was better than expected on Tuesday.

“Temperatures have dropped sharply in the last week or so, and people will have to use more gas to heat their homes because of this,” Carter said.

“Since autumn was pretty mild, we won’t see the real effects of higher energy bills until now. Even though government support is still in place, for now, any changes made after the April deadline could cause inflation to go up.

The Bank of England has a hard time getting inflation back to its goal of 2% while keeping in mind that the economy is getting worse. This was clear from the latest data on the U.K. job market, which showed that both unemployment and wage growth went up this week.

“Even though inflation is going down, it is still much higher than wages. As a result, we are heading into a new winter of discontent, with most strikes happening in the unionized public sector and in industries that used to be run by the government,” Carter said.

The market thinks that the Bank will raise interest rates by 50 basis points on Thursday. This would bring the benchmark rate to 3.5%. Policymakers have hinted that the rate of hikes might slow down in 2023. But inflation is still well above the target.

“The Chancellor’s Autumn Statement in November helped calm the waters after a lot of trouble for months,” Carter said. “But inflation is still well above the Bank of England’s 2% goal, so there is still a long way to go.”

“It’s not likely that inflation will drop quickly, but it’s good to see that it’s finally going in the right direction.”