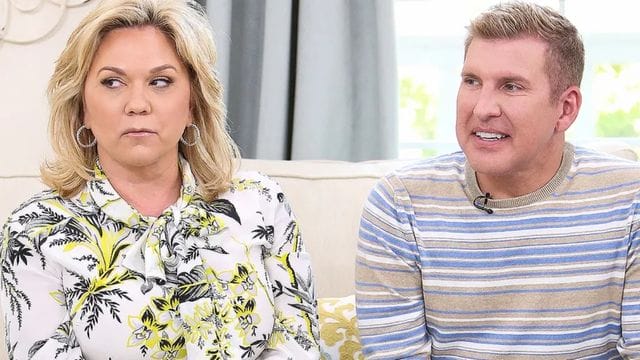 The cast members of Chrisley Knows Best were hit with 12 charges of bank and wire fraud, tax evasion, and conspiracy in 2019.

In addition to the possibility of having their Tennessee houses foreclosed on, Todd and Julie Chrisley are currently facing charges of fraud totaling $36 million.

In order to satisfy the restitution judgment of $17.2 million that was issued by Judge Eleanor Ross of the United States District Court for the Southern District of Georgia in Atlanta, the Chrisley Knows Best couple will reportedly have to sell their two properties in Nashville, which have a combined value of $9 million.

“They are going to have to let go of a lot of stuff, including their homes, which is quite unfortunate. They will be unable to manage the financial burden, “the source mentioned to the media. However, the well-being of their children, particularly their youngest son, is currently their first priority.

Chase, 26, Savannah, 25, and Grayson, 16, are Todd and Julie’s three children together. Chase is the oldest. Savannah is the youngest. In addition to that, they are the primary caregivers for their granddaughter Chloe, who is 10 years old and is the daughter of Todd’s estranged son Kyle, who is 31 and has a daughter from a previous marriage.

PEOPLE spoke with Neama Rahmani, the president of West Coast Trial Lawyers and a former federal prosecutor, who has no ties to the Chrisley case, to confirm that the pair is anticipated to spend “85 percent of their sentence” under federal law.

“And that’s the bare minimum they’ll have to serve if they’re model inmates,” Rahmani said. “Unlike in states where inmates can sometimes serve less than half of their sentence, you only get a slight reduction for good behavior under federal statutes.”

Rahmani went on to say that the couple, who will begin their prison sentences in January, most likely received “high sentences” because “they didn’t accept any responsibility, even after they were convicted.”

Insider says that Julie got teary-eyed during the trial when she talked about a conversation she had with her granddaughter Chloe. “No child should hear their 10-year-old say that she doesn’t want to live if their mom leaves,” she said.

Savannah talked about the possibility of getting custody of her sister Chloe and her brother Grayson on Monday’s episode of her podcast, Unlocked with Savannah Chrisley. This was before her parents were sentenced.

She said on the show, “It’s just really hard to sit here for four days before I have to sit in court.” “I don’t know what will happen to me or to my family. I know that the next few weeks will be very hard, and I may not be able to go home with both of my parents. That’s what the odds are, that’s what’s likely to happen, and that’s what I’m used to now.”

She continued, “I come home on Tuesday, and I have custody of a 16-year-old and a 10-year-old, and this will be the first Thanksgiving that we are not altogether as a family.”