Today, the Prime Minister Will Hold a Roadshow in Delhi in Anticipation of Tomorrow’s Massive BJP Meeting!

The BJP's two-day national executive meeting will start today at the NDMC Convention Center in Delhi. 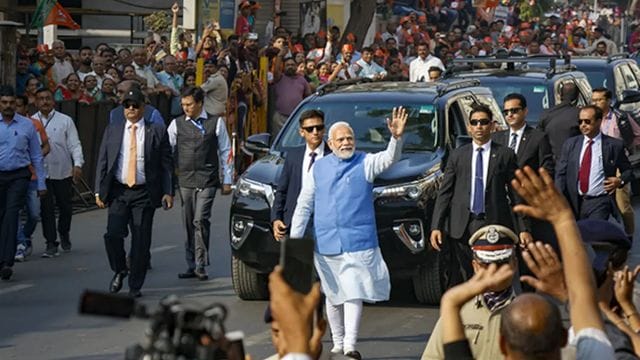 On Monday, Prime Minister Narendra Modi will lead a big roadshow for the BJP in the national capital. The BJP’s two-day national executive meeting will start today at the NDMC Convention Center in this city.

JP Nadda, who is the national president of the BJP, will be there, along with Union Ministers like Home Minister Amit Shah, Chief Ministers of states where the BJP is in charge, and other senior party leaders.

From Patel Chowk to Parliament Street, Prime Minister Modi will go on a roadshow. Before the party’s plans changed, the roadshow was set to happen on Tuesday.

In some parts of Delhi, traffic is likely to be slowed down, and the Delhi Police have said that special traffic plans have been made to keep things moving smoothly.

After winning big in Gujarat, this is the party’s first big meeting. Earlier, in Gujarat, Modi’s home state, he led a huge road show that went for more than 50 kilometers and took more than five hours.

“The Bhartiya Janta Party (BJP) is holding a roadshow on Sansad Marg from Patel Chowk to Sansad Marg-Jai Singh Road Junction on January 16 at 3 p.m. and later. The Prime Minister of India will show up at the said road show. There will be special traffic plans in place to make sure that traffic flows smoothly along the roadshow route “said Delhi Police in a statement.

Traffic will be redirected at Gol Dak Khana, Gurdwara Rakab Ganj, Windsor, Rail Bhawan, Outer CC-Sansad Marg Junction, Raisina Road-Jantar Mantar Road Junction, Janpath-Tolstoy Road Junction, and Tolstoy road KG Marg Junction. People have been told by the Delhi Police to stay away from the roads, stretches, and areas listed above that the roadshow will go through.

Vinod Tawde, who is the general secretary of the BJP, said that during the two-day executive meeting, the NDMC Convention Center will host a huge exhibition with six different themes, such as Good Governance First, Inclusive and Empowered India, and Vishwa Guru Bharat.

Before the national executive, the BJP headquarters will host a meeting of the party’s national leaders, state unit presidents, and various organizational secretaries.

Raha Kapoor’s Mom Alia Bhatt Says Her Cat Edward is Ignoring Her and Shares Photos of a “Not So Happy Sunday.”