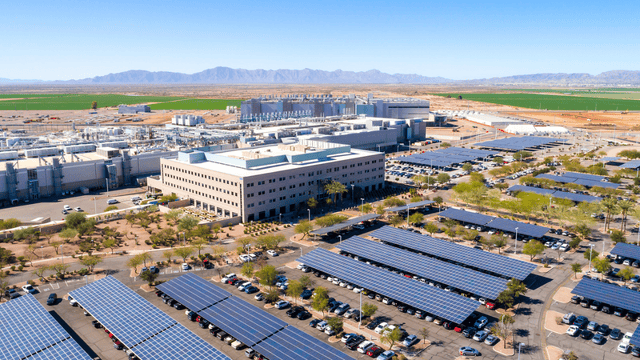 At an event in Arizona on Tuesday, President Joe Biden and Apple CEO Tim Cook both spoke. Cook said that Apple will buy microchips made in the U.S. A video from the event shows that Cook said Apple would buy chips made in a new factory in Arizona.

“And now, thanks to the hard work of so many people, these chips can proudly say Made in America,” Cook said. “This is a very important time,” he said. Taiwan Semiconductor Manufacturing Company, which has more than half of the world market share for foundries, will own and run the chip factories. TSMC makes the most advanced processors, like the ones in the newest iPhones, iPads, and Macs.

The plants will be able to make 4-nanometer and 3-nanometer chips, which are used in advanced processors like Apple’s A-series and M-series and Nvidia’s graphics processors.

Cook said, “Today is just the start.” “Today, we’re combining TSMC’s expertise with American workers’ unmatched creativity. We’re putting money into a better future by planting our seed in the Arizona desert. And Apple is happy to be a part of its growth.”

Biden said, “Apple had to buy all of its high-tech chips from other countries. Now, they’re going to bring more of their supply chain back home.” “It could change everything.” Cook tweeted on Tuesday that Apple would be the “site’s biggest customer.”

Most of TSMC’s manufacturing is done in Taiwan at the moment, which has made lawmakers in the U.S. and Europe wonder how they can make sure they have enough supplies in case China invades or there are other problems in the area. Chip companies like Nvidia and Apple make their own designs, but they hire other companies like TSMC and Samsung Foundry to make the chips.

The U.S. government will help pay for some of the factories in Arizona. Biden signed the CHIPS and Science Act into law earlier this year. The law gives billions of dollars in tax breaks to companies that make chips in the United States.

Tuesday, TSMC said it would spend $40 billion on the two plants in Arizona. By 2024, chips should be made at the first plant in Phoenix. The Biden government says that the second plant will open in 2026.

The National Economic Council says that when the TSMC plants are fully running, they will make 600,000 wafers per year, which is enough to meet the annual demand in the U.S. The U.S. plants will only make up a small part of TSMC’s total capacity, which in 2020 was 12 million wafers.

AMD CEO Lisa Su said in a Tuesday speech that the company plans to use the TSMC Arizona fabs a lot. Intel, an American chip company, has also said it wants to compete with Apple’s business. It is building chip factories in Arizona and Ohio, which the CHIPS act is expected to help pay for in part.

Last year, Intel said it would let other companies use it as a foundry, but its manufacturing skills are currently behind those of TSMC. This hurts Intel’s chances of getting the fastest chips.