Lucile Randon was born in the same year that New York's first subway opened and the first Tour de France took place. She grew up in the southern town of Ales with three brothers and was the only girl in a Protestant family. 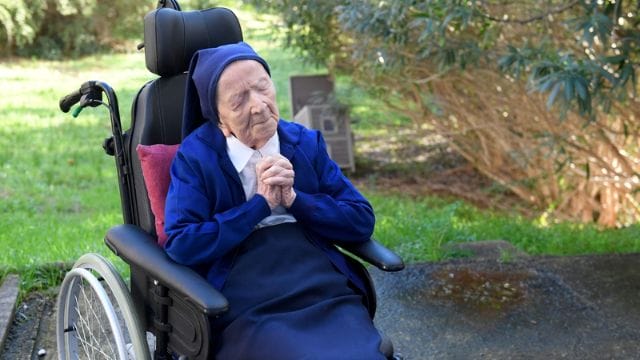 French nun Lucile Randon, who was known to be the oldest person in the world, died on Tuesday at the age of 118, a spokesman told AFP. Randon, who was also known as Sister Andre, was born in the south of France on February 11, 1904. This was ten years before World War I.

A spokesman, David Tavella, said that she died in her sleep at her nursing home in Toulon. “There’s a lot of sadness, but she wanted to be with her beloved brother. It makes her feel free “AFP talked to Tavella, who works at the Sainte-Catherine-Laboure nursing home.

The sister was known for a long time as the oldest person in Europe. When Kane Tanaka, who was 119 years old and from Japan, died last year, she became the oldest person on Earth. Randon was born in the same year that New York’s first subway opened and the Tour de France was held for the first time.

She grew up in the southern town of Ales with three brothers and was the only girl in a Protestant family. In an interview with AFP on her 116th birthday, she said that seeing two of her brothers again after World War I was one of her favourite memories. “It didn’t happen very often. Most families had two dead people instead of two living people. Both of them went back, “she told me.

She worked as a governess for the children of wealthy families in Paris. At the time, she said it was the best time of her life.

She became a Catholic and was baptised when she was 26 years old. She joined the Daughters of Charity order of nuns at the age of 41 because she wanted to “go further.”

Sister Andre was then sent to work for 31 years at a hospital in Vichy. She moved to Toulon on the Mediterranean coast when she was older. During her time in the nursing home, she prayed, ate, and got visits from other residents and hospice workers.

She also got a steady stream of letters, and she replied to almost all of them. In 2021, she got Covid-19, which spread to 81 other people in her nursing home.

Stay tuned to New Times Of India for more updates on World News and bookmark our website.