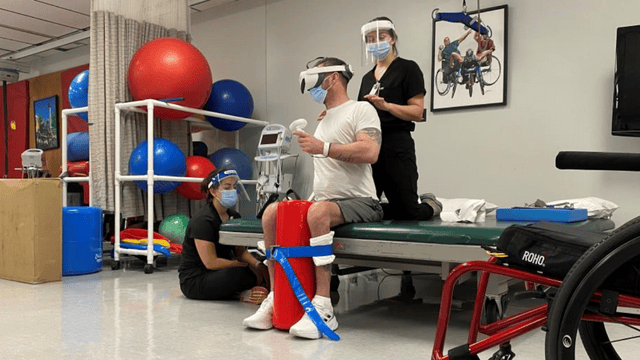 For the past two years, AppliedVR has been collaborating with the Department of Veterans Affairs and, by extension, the VHA. “The VA was an early adopter of immersive medicine,” CEO Matthew Stoudt explains. “They’ve been utilizing it to treat PTSD at 120 locations and over a thousand practitioners, so they realize its power.”

Stoudt says for many years chronic pain, especially chronic low back pain, has been treated as if it were acute pain that is, with medicines and surgery. Immersive VR broadens the spectrum of treatment to encompass the mental and emotional components of pain, according to Stoudt. “We also need to address the comorbidities of anxiety and depression,” he says.

The program developed by AppliedVR combines traditional pain management strategies such as body awareness, pain distraction, relaxation, and behavior modification with immersive images and music. In pain distraction, for example, the patient throws snowballs at bears, which might overwhelm the brain circuits that would typically transmit pain signals, according to Stoudt.

“We are right at the confluence of pain and mental health,” Stoudt says. AppliedVR’s collaboration with the VA was made possible through a contract with the VHA Innovation Ecosystem, which seeks out and implements novel healthcare technologies for the benefit of veterans.

When a VA doctor orders VR therapy for a patient, the VA will notify AppliedVR to send a VR headset to the patient’s house, where the patient will finish the eight-week self-directed program. Once completed, the patient returns the headset, and the VA reimburses AppliedVR for the costs incurred.

Chronic discomfort is all too frequent among veterans. More than nine million veterans are served by the VHA, with chronic pain affecting more than half of them.

The VHA has depended mostly on medical procedures and surgery to treat chronic pain such as low back pain. However, these approaches are expensive.

A 2020 research in the Journal of American Medical Association reported that expenses linked with lower back and neck injury reached $134 billion, making it the highest-cost category of health spending in the country. In addition, surgery for back disorders is frequently only slightly or partially successful.

Caregivers also take drugs, often opioids, to relieve pain, and opioid addiction is a major issue in the veteran community. According to studies from The National Institute on Drug Abuse, one in every ten veterans who seek care at a VA institution satisfies the criteria for a substance abuse disorder. The same mental illnesses that lead to drug users can also contribute to suicide: veterans commit suicide at roughly twice the rate of the general population in the United States.

As a result, innovative approaches to pain management are very welcome, and many in healthcare are looking to develop technology such as virtual reality for inspiration.

A 2021 clinical research found that an eight-week AppliedVR therapy program can significantly enhance the way many people cope with pain. In July, AppliedVR said that a follow-up research had revealed that a large number of patients had maintained a “clinically meaningful” improvement in pain management six months after completing the VR therapy.

Those findings formed part of the data AppliedVR presented to the FDA before receiving approval to market RelieVRx. And they certainly provided some science to support the VA’s interest in using it to aid veterans.

According to Stoudt, RelieVRx provides the VA with a more holistic treatment option for chronic pain. “The VA is very firmly thinking about managing suffering that is a product of the wounds of war, and the mental health side of the [healing] process.”

He continues, “Our wounded fighters are heroes.” “They deserve the best healthcare in the world, including our most modern technology.”