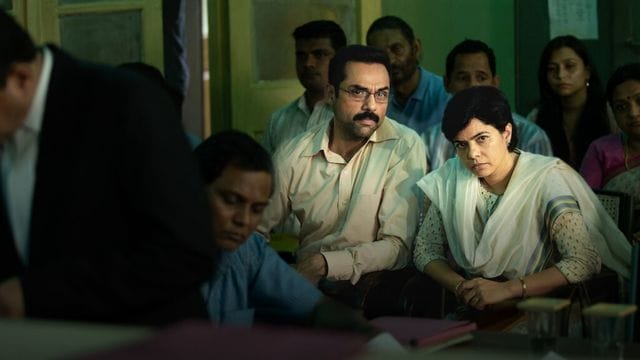 Abhay Deol has released the first trailer for Trial By Fire, which is based on the real-life Uphar cinema tragedy. It is a Netflix original. The first episode of Trial by Fire will air on Friday, January 13.

In 1997, there was a fire at the Uphaar Cinema. At least 100 people were hurt, and 59 died. The trailer starts in a warm and cozy home, where the mom is saying goodbye to her kids before they go to the movies. Soon, we’ll get to see how terrible the fire in the movie theatre was. Next, Abhay and Rajshri Deshpande are seen as struggling parents fighting the worst war any parent can fight: the fight for justice after their kids died.

The trailer doesn’t make me feel angry or suspenseful in any way. Instead, it has a quiet tone that reminds me of Talvar by Meghna Gulzar. Trial By Fire will show what the families of the people who died in the Uphar tragedy went through as they tried to get justice. It is based on the book Trial by Fire: The Sad Story of the Uphaar Fire Tragedy by Neelam Krishnamoorthy and Shekhar Krishnamoorthy.

Abhay posted a link to the trailer on Instagram with the words, “It’s finally here! On June 13, 1997, a lot of families lives changed. #TrialByFire tells the story of Neelam and Shekhar Krishnamoorthy, who have fought for justice along with other families. You can watch their story in #TrialByFire, which comes out on @netflix in on January 13.”

Trial By Fire is a movie that is directed by Prashant Nair and made by Endemol Shine India and House of Talkies. In Trial By Fire, Abhay and Rajshri play the main couple. Anupam Kher, Ratna Pathak Shah, Shilpa Shukla, Ashish Vidyarthi, Rajesh Tailang, and Shardul Bharadwaj are also in the movie.

In a press release about Trial By Fire, Prashant Nair said, “Neelam and Shekhar Krishnamoorthy are inspiring examples of the kind of resilience and courage it takes to move the needle in this country, even a little bit.”

He added, “What happened to them and how they have had to fight for justice is horrible, and sadly, there are a lot of other people in similar situations today. We appreciate how brave Netflix was as a partner in telling this story.”