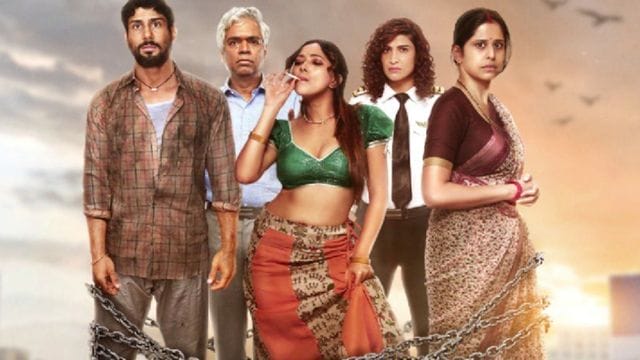 Shweta Basu Prasad, Prateik Babbar, Ahana Kumra, Sai Tamankar, and Prakash Belawadi relive the chaos and horrors of the Covid-19 outbreak in Madhur Bhandarkar’s film, which focuses on the unseen stories of the lockdown from ground zero.

The trailer for India Lockdown was released on Thursday. Shweta Basu Prasad, Prateik Babbar, Ahana Kumra, Sai Tamankar, Prakash Belawadi, and others star in the Zee5 film as they struggle to survive the first lockdown and then the second lockdown during the Covid-19 pandemic in 2020. Madhur Bhandarkar’s film will be released on December 2nd.

The nearly two-and-a-half-minute trailer begins with people from various backgrounds attempting to keep up with Covid-19 lockdown updates, including a pilot, a sex worker, a daily-wage laborer, a houseworker and mother, and others.

Ahana, a pilot, initially distracts herself by flirting with a neighbor, and Prateik Babbar, a migrant laborer, is hopeful that his wife, a house worker (Sai), and he will resume work soon because the lockdown will end in ’21 days.’

Despite their best efforts, the lockdown continues, and they must now choose between giving up and surviving at all costs. As physical contact is restricted due to Covid-19, Shweta Basu Prasad, who plays a sex worker, is seen looking for new ways to earn money.

Prateik, Sai, and their children walk hundreds of kilometers to their village after failing to pay rent and struggling to make ends meet in a big city with no income.

While Shweta was recently seen in Disney+ Hotstar’s Criminal Minds as a public prosecutor advocate, Sai made her debut in the 2021 film Mimi. Aside from this film, Aahana Kumra will co-star with Kajol in another December release, Salaam Venky.

Prateik Babbar was most recently seen as the lead in the film Cobalt Blue. Prakash Belawadi, an actor, recently appeared in the popular Kannada show Humble Politician Nograj.

The film, which is being produced by Bhandarkar Entertainment, Pranav Jain, Dhaval Jayantilal Gada, and Aksshay Jayantilal Gada, will tell the lives of regular individuals who battled to make ends meet during the most difficult period—the COVID-19 lockdown.

In relation to the film, Madhur Bhandarkar stated that it is the result of his observations and will represent the unvarnished stories of genuine people from diverse walks of life. According to him, the film would touch many people in some way.