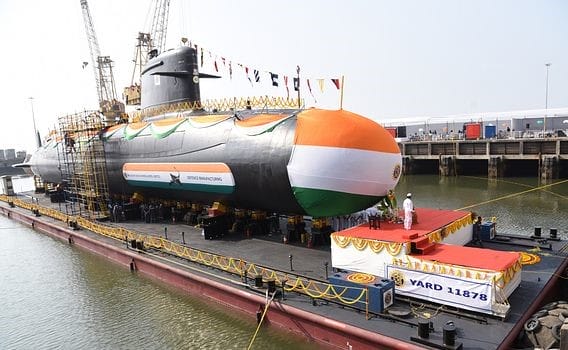 In February of last year, the recently commissioned submarine made her first sea sortie, kicking off the sea trials.
The fifth submarine of the Kalvari class, Vagir, was commissioned by the Indian Navy on Monday in the presence of Admiral R. Hari Kumar, Chief of the Naval Staff.

In February of last year, the recently commissioned submarine made her first sea sortie, kicking off the sea trials. According to the defense ministry, the submarine underwent a number of thorough acceptance checks as well as rigorous and arduous sea testing before being commissioned.

Admiral R. Hari Kumar stated Vagir is a deadly platform with a strong armament package while speaking at the event. The Chief of Naval Staff emphasized that Vagir was the third submarine added to the Indian Navy in less than 24 months, saying that this was a shining example of the shipyards in India’s ability to build sophisticated and intricate platforms.

In partnership with Naval Group, France, Mazagon Dock Shipbuilders Limited (MDL) Mumbai is producing the Kalvari class submarines in India. Vagir is capable of carrying out a variety of tasks, such as mine laying, anti-surface warfare, intelligence collection, and observation operations.

The submarine of the same name, Vagir, was commissioned in November 1973 and carried out a wide range of operational operations, including deterrent patrols. In January 2001, it was decommissioned after over three decades of service to the country. The distinction of having the shortest build period among all submarines produced domestically to date belongs to Vagir in its new guise.
Old ships and submarines never die in the navy; it’s a long-standing custom. The submarine in front of us is a rebirth of the former Vagir, which served India and the Indian Navy for three decades, in keeping with the spirit, Admiral Kumar stated. The Sand Fish, a dangerous deep-water predator of the Indian Ocean, gives Vagir its name.

Bigg Boss 16: When Priyanka Chahar Leave the House, Salman Says He Would Like to Meet Her