The Actor Shares His  Photos of Disha Patani and Aleksandar Alex Ilic: Here Are Five Pictures of a Rumoured Couple That Went Viral!! 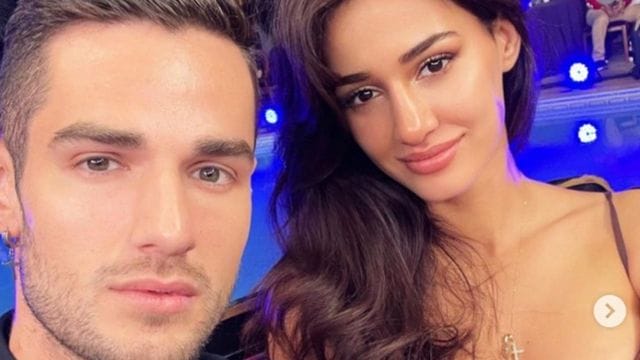 On Wednesday, Aleksandar shared photos of himself with Disha on his Instagram account. Disha looked stunning in a black lacy top with a plunging neckline in the photos. He was spotted twinning with her while wearing a black t-shirt. The couple appeared to be in love as they took selfies while enjoying a candlelight dinner. He captioned the photographs with a cute emoji.

Disha shared the photos on her Instagram story. Tiger Shroff’s sister, Krishna Shroff, who has a close relationship with Disha, commented on the photos, saying, “Can’t wait to read what they write after this pic.” Her remark has gone viral on the internet. Fans were also seen reacting to the photos, and they were all hearts. Take a look at this:

Disha recently upped her hotness quotient by wearing a cutout dress to a party. She was seen looking stylish while out with her rumoured beau. Following the party, Disha and Aleksandar posted a cool elevator selfie on their respective Instagram accounts. He included a heart emoji in his caption, whereas Disha did not. However, Tiger’s sister Krishna, who never fails to cheer Disha up, left a comment on her post. She written, “Gainzzz.” Fans were seen complimenting their appearance.

Aleksandar, a model and actor, recently responded to the rumours in an interview with Bombay Times. He explained his background by saying, “I am originally from Serbia and have been in India for the past seven years. I started out as a model and then moved on to acting.” He also mentioned meeting Disha during his first days in Mumbai.

Disha and Aleksandar took a quick vacation in November 2022. He posted a photo dump on his Instagram account, adding fuel to the relationship rumours. Krishna was seen accompanying the couple on their romantic getaway. Disha had a great time with Aleksandar, from lounging by the pool in a bikini to going shopping with him. In the caption, he included an aeroplane emoji.

Aleksandar revealed during the interview that he and Disha were flatmates in 2015. He stated, “Disha, myself, and a couple of other models shared a flat. We hit it off right away. We both have a strong interest in fitness, which has helped us bond. So we began going to the gym together and eating lunch and dinner together. We spent a lot of time together in the house. We became great friends.” He also stated that Disha is like a family member to him.

In this photo, the rumoured couple posed with Tiger’s sister Krishna, who is also a fitness fanatic. Aleksandar chose a quirky pose, while Disha and Krishna were adorable. In his caption, he used a red heart emoji. “We cute,” Krishna said in response.

The Serbian model also discussed his friendship with Tiger. He stated that the relationship rumours had no effect on his relationship with Tiger. He also declined to comment on Tiger and Disha’s rumoured split. When asked who he prefers, Tiger or Disha? “Well, I am close to both of them, and yes, we do hang out together,” he explained.

These photos of Disha and Aleksandar certainly raised some eyebrows. The way Disha leaned on him in the photos says a lot about their relationship. In a pink mini-bodycon dress, she showed off her perfectly toned body. Krishna was even seen in the comments section using a heart emoji.

In response to reports of his rumored relationship with Disha, he told the Bombay Times, “This guessing game has been going on for a few weeks now. The problem is that we already know the truth. I’m not sure why people have to guess what’s going on. Why can’t they just let others live their lives in peace? We simply laugh at these stories.”

On January 6th, a Large Increase in Newly Reported Coronavirus Cases Was Noted in India!