The Ability of Dolphins to Communicate is Negatively Impacted by Noise Pollution, According to a Recent Study!

Dolphins can be very hurt by the noise made by big commercial ships, military sonars, or offshore drilling. How? Here's how. 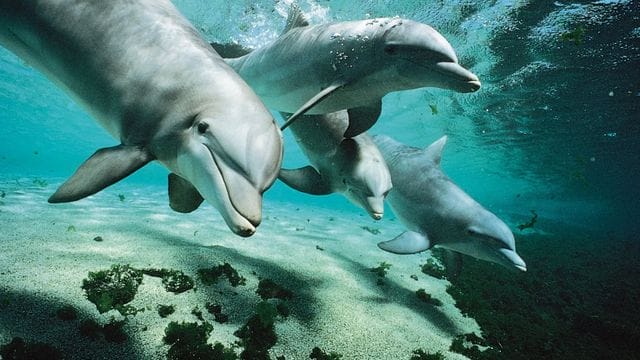 A new study has found that the noise people make makes it harder for dolphins to talk to each other and work together. It said that as the noise level in the water goes up, these mammals have to “shout” at each other.

Dolphins are social animals that use squeaks, whistles, and clicks to talk to each other. They use echolocation to find food and other things as well. So, the noise made by humans, like that from big commercial ships, military sonars, or offshore drilling, can have a big effect on their health.

How Did the Study Take Place?

To make their observations, researchers put two dolphins named Delta and Reese in an experimental lagoon and taught them to press their underwater buttons at either end of the enclosure one second apart. Both dolphins were also given tags that could record their movements and sounds.

During each trial, Delta and Resse were sent off from a starting point, and in some trials, one was held back for five to ten seconds while the other was sent off right away. In delayed-release trials, the dolphins could only talk to each other to figure out when to press the button.

Researchers did about 200 of these tests and used underwater speakers to make the experimental lagoon sound like different places.

What Did the Study Find Out?


It was found that as it got louder underwater, both dolphins changed their behavior to talk to each other and work together. Aside from making their calls louder and longer, they also changed how they looked at each other. They turned their bodies toward each other and swam across the lagoon to get closer.

Researchers noticed that even though the dolphins tried to work around the noise, they were less successful at the task. According to the study, “the success of cooperative tasks went down when there was noise, dropping from 85% when there was no noise to 62.5 when there was the most noise.”

Previous research has shown that dolphins change their behavior when they see boats, but until now, no one had looked at how noise made by humans can affect how well these aquatic animals work together.

What Happens When the Oceans Are Noisy?

It is known that marine animals use sound to find their way, find food, and keep themselves safe. Since sound travels faster through water than through air, it is an important way to talk because it can send a lot of information quickly and over long distances. Scientists think that fish use sounds to find, court, and choose mates.

But many studies and events have shown that the noises made by drilling, commercial ships, and military operations are bad for marine life. In 2020, about 200 whales died on the west coast of Tasmania in one of Australia’s worst mass strandings. Researchers think that noise pollution in the oceans is linked to mass strandings.

Researchers at the University of Maryland did a study in 2018 that found “when there was more ambient sound, mostly from passing boats and ships, the dolphins switched to higher frequencies and streamlined their whistles,” according to a report by Mongabay.

The Guardian recently reported that the newly launched MV Ganga Vilas cruise, which will “make stops at about 50 tourist and heritage sites along the Ganga and Brahmaputra river systems,” could do a lot of damage to the habitat of the Ganges river dolphin, which already faces problems like water pollution and poaching.

Environmentalists and conservationists told the newspaper that these dolphins are “almost blind” and that a rise in cruise tourism could kill them off.

The Following Are the Upcoming Mobile Phones That Will Be Available in India in the Month of February 2023: You Can Find a List Below!