Thai Vintage Photos of Ananya Panday, Navya Naveli Nanda, and Vedang Raina, Star of the Archies, on a Yacht!!

Actor Vedang Raina of The Archies has uploaded photos from his recent trip to Thailand, where he was joined by fellow actors Ananya Panday and Navya Naveli Nanda. 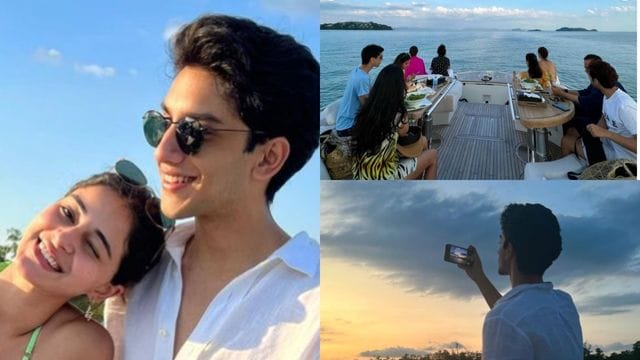 Ananya Panday and Navya Naveli Nanda, who are best friends, recently celebrated the New Year with The Archies team in Thailand. Zoya Akhtar, a director, and Vedang Raina, an actor, were also there. Now, Vedang has shared a bunch of pictures from when they were all on a yacht in Phuket.

“Hello 2023,” Vedang wrote with the photos on Instagram. In the first picture, he is drinking coconut water on the beach while wearing a white shirt and black sunglasses. The next picture is a group shot of him and his traveling companions enjoying the view from the deck of a yacht.

Actor Tara Sharma, who also has a key role in the movie, replied to the post with a heart emoji. One of Vedang’s fans said,  “ahhh I fainted.” Another asked him, “Which face wash are you using??”  Another fan wrote, “You are the sunshine yourself.. already a star before the Archie’s release.” Many people also went crazy when they saw Ananya in his pictures.

The Indian version of the popular American comic Archies Comics, the Netflix movie takes place in the 1960s. The Archies follows the lives of popular fictional teenagers like Archie Andrews, Jughead Jones, Betty Cooper, Veronica Lodge, and Reggie Mantle. The story is set in the Anglo-Indian community of India.

Zoya Akhtar and Reema Kagti, who have worked together for a long time, make The Archies through their company Tiger Baby, Graphic India, and Archie Comics.

Telegram, a Competitor to Whatsapp, Has Released New Features, Including Hidden Media, a Profile Image for Contacts, and Many More!!