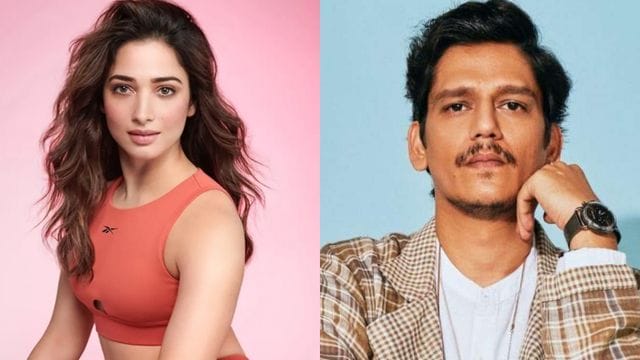 Tamannaah Bhatia and Vijay Varma are in Mumbai now. They spent New Year’s in Goa together. This was the first time the two had been seen in public since their fans saw them “kissing” each other in a video that went viral on social media. Tamannaah and Vijay haven’t said anything about the rumors about their relationship yet.

Tamannaah and Vijay were seen coming back to Mumbai late Tuesday night. At the airport, they were happy to pose for the paparazzi. Tamannaah was seen wearing a black dress with a low neckline and a shrug. Vijay wore a white t-shirt with a design and jeans.

Pinkvilla said that Tamannaah and Vijay met for the first time on the set of Sujoy Ghosh’s short film, which will be in Lust Stories 2. “They got along right away, and they really like each other’s work. “They are in a good place,” says someone who knows what’s going on.

Tamannaah and Vijay Varma have been seen together before at a concert by Diljit Dosanjh in Mumbai. Kartik Aaryan, Angad Bedi, and Neha Dhupia were all there as well. The Gully Boy actor had also been to Tamannaah’s house on December 21, which was her birthday.

A video that went viral recently showed the two actors kissing in Goa as the year 2023 began. In the video that has been going around on Reddit, as the camera pans to show people ringing in 2023 and fireworks going off in the night sky, Tamannaah and Vijay are briefly seen holding each other close and kissing each other as people shout and screaming “Happy New Year!” The actor from Bamfaad wore a white shirt for the event, and the actress from Babli Bouncer wore a funky pink outfit.

Vijay Varma’s role as Hamza in Alia Bhatt’s Darlings was well-liked by the audience. Now, the actor is going to put his acting skills to the test in Sujoy Ghosh’s The Devotion Of Suspect X, where he’ll be seen with Kareena Kapoor. The actor will also be in the third season of the popular crime show Mirzapur and in another OTT show called Dahaad. As for Tamannaah, she’ll be having a busy 2023 with the Telugu film Bhola Shankar, the Hindi film Bole Chudiyan and Malayalam film Bandra.