Sachin Pilot said, "When we were in the opposition, we talked about Vasundhara Raje's corruption, but in four years, we were not able to do anything about it." 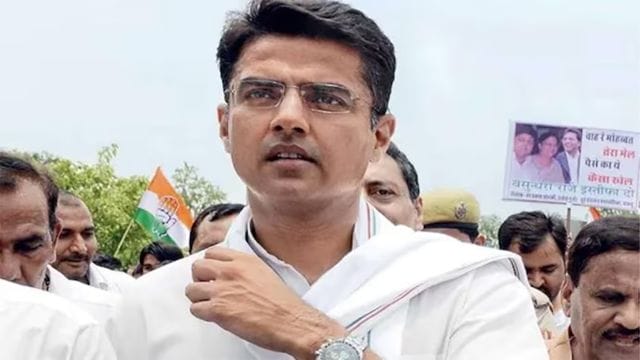 In the latest fight between Rajasthan’s two top Congress leaders, Sachin Pilot questioned today why Chief Minister Ashok Gehlot’s government isn’t doing anything about corruption allegations against BJP leader Vasundhara Raje.
“The charges against Vasundhara Raje must be taken seriously by the government. There’s still a year left, “At the Jaipur Lit Fest, Sachin Pilot told the press about it.

“When we were in the opposition, we accused the BJP government and Chief Minister Vasundhara Raje of being corrupt. But in four years, we couldn’t do anything to stop her. It’s time to do something, “Mr Pilot said.

In a video from yesterday, Ashok Gehlot seemed to call Mr. Pilot a virus. “I’m back to meetings. There was a corona earlier, and a big corona came into our party,” Mr. Gehlot was overheard saying at a meeting to talk about his last budget before the state election.

Even though the Chief Minister didn’t mention any names, most people think he was talking about his former deputy, whom he has called “gaddar” and “nikamma” in the past. The nasty back-and-forth shows that Congress has a big problem right before an election in one of the few states it controls.

Mr. Pilot started a solo campaign for the Rajasthan elections, saying that he wanted to build on the goodwill generated by Rahul Gandhi’s Bharat Jodo Yatra. This made it clear that there is no chance of a reconciliation. As he fights with his own Chief Minister over things like the exam paper leak, many in the Congress are worried that the unresolved leadership fight will get too much attention.

Mr. Pilot’s campaign comes almost two months after Mr. Gehlot called his former deputy a “gaddar” (a traitor) and said he would not be chief minister in an interview with NDTV.

After the Congress won the Rajasthan election in 2018, both Gehlot and Pilot ran for the job of Chief Minister. This is when the fight between them began. Even though Mr. Pilot agreed to take a back seat to the veteran, he rebelled after two years and asked for more power.

But more than 100 MLAs chose to stick with Mr. Gehlot and the rebellion died down. Mr. Pilot has never been able to get more than 20 MLAs on his side, which has made it harder for the party to try to make peace.

In September, when Mr. Gehlot was being considered for the job of Congress party president, nearly 100 MLAs who were loyal to him rebelled when they heard that Mr. Pilot would replace him as Chief Minister of Rajasthan. Mr. Gehlot chose to stay in Rajasthan, and the Congress chose Mallikarjun Kharge to replace Sonia Gandhi.

With Netflix’s Announcement of Its Upcoming Schedule of Films for 2023, Alia Bhatt Has Lost Her Cool Over Heart of Stone