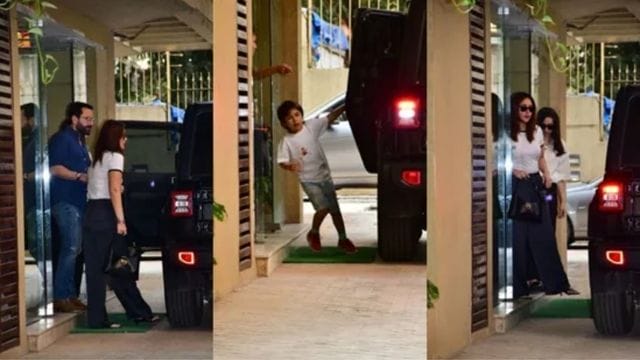 Kareena posted pictures from Karisma Kapoor’s house on her Instagram Stories. In the first photo, Saif, Reema Jain, and Natasha Nanda sat on couches and chairs and smiled and posed for the camera. “Jam fam,” Kareena wrote. In another picture, she showed some food and tagged Karisma. She wrote, “Lolo k ghar ka feast” (Lolo’s house party).

Kareena and Karisma both wore black and white outfits to the event. Taimur Ali Khan wore a white T-shirt and shorts. Saif wore a blue shirt and blue jeans. Kareena posed for the photographers and also gave them a wave. In an Instagram video, Taimur can be seen trying to open the car door so he can get inside. A fan asked, “Is Taimur excited to meet his sister Raha?” in response to the post.

In several pictures, they were seen getting out of their cars outside Ranbir’s house. Neetu Kapoor met up with them at her son’s house. Neetu chose a cream top with a print, white pants, and heels. As she got out of her car, she also had a bag with her.

On November 6, 2022, Alia Bhatt and Ranbir gave birth to their daughter Raha. Alia wrote on Instagram, in a post about the baby’s birth, “And the best news of our lives is that our baby is here…. and what a magical girl she is. We are officially overflowing with love. We are blessed and crazy about our children. I love Alia and Ranbir so much.” The couple got married on April 14, 2022, and in June 2022, they told everyone that Alia was pregnant.

Alia will be seen in director Karan Johar’s Rocky aur Rani Ki Prem Kahani alongside Ranveer Singh, Dharmendra, Shabana Azmi, and Jaya Bachchan. She will also be in Heart of Stone, which is her first movie in Hollywood, and Farhan Akhtar’s Jee Le Zara.

Ranbir will next be seen in the romantic comedy Tu Jhoothi Main Makkaar, directed by Luv Ranjan, with Shraddha Kapoor. He will also be in the gangster drama Animal, directed by Sandeep Reddy Vanga, with Rashmika Mandanna, Anil Kapoor, and Bobby Deol.

Kareena’s next movie is a thriller called The Devotion of Suspect X, which is directed by Sujoy Ghosh. It also features Vijay Varma, Jaideep Ahlawat, and others. Besides that, she has the next untitled film by director Hansal Mehta. Om Raut’s Adipurush, which will come out in January 2023, will feature Saif as Ravan. Leading roles are also played by Kriti Sanon and Prabhas.

Uorfi Met With Javed Akhtar Said He is “A Legend”, Shared a Pic With Him! Watch!