On social media, pictures of Rakhi Sawant in a red suit and her boyfriend Adil Khan Durrani holding what looks like a marriage certificate have gone viral. The date on the certificate, however, is July 2, 2022, which suggests that the couple may have gotten married last year. 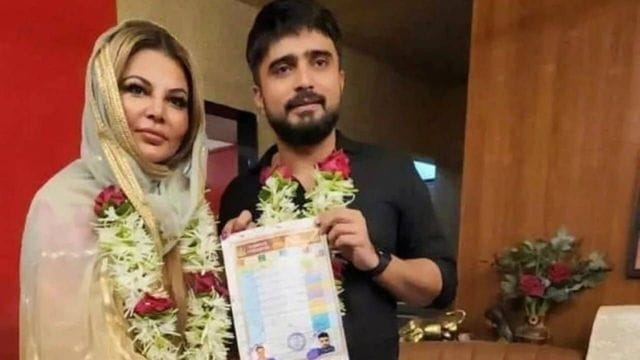 TV actor and former contestant on the reality show Bigg Boss Rakhi Sawant, who is notorious for her unpredictable outbursts and her propensity for courting controversy, is once again in the news. Sawant has made headlines once again, but this time it’s because she married her long-term boyfriend Adil Khan Durrani in a surprise ceremony.

The wedding was held in a courthouse, and the actress has not yet made the announcement official on her Instagram account.

The social media platforms, on the other hand, are rich with photographs of the couple that give the impression that the two are married. In the images, Rakhi and Adil can be seen smiling for the camera while posing with what appears to be a wedding certificate in their hands. Both Rakhi and Adil are seen dressed formally, with Rakhi donning a red suit and Adil a black shirt over a pair of damaged jeans.

Another picture shows Rakhi putting her signature on the official wedding document. However, it appears that the marriage was recorded the previous year, and the photographs have only just become available on the internet at this point. According to the information on the certificate, the happy couple tied the knot on July 2, 2022.

After her memorable altercation with musician Mika Singh, Rakhi Sawant first gained widespread notoriety. Since that time, she has continued to make the news due to the unusual perspective she takes on many topics and the peculiar actions she takes. In addition, Rakhi was a contestant on the reality show titled “Rakhi Ka Swayamvar,” which aired on NDTV Imagine.

Out of the three men left standing at the end of the competition, Rakhi Sawant chose Elesh Parujanwala, a successful Canadian entrepreneur who resides in Toronto, to be her future husband.

The relationship didn’t last long, though. After Bigg Boss Marathi 4, Rakhi made her first public appearance with her boyfriend at the time, Adil.

After Rakhi split up with another man, Ritesh, whom she said she was married to, she began dating him. She is said to have asked for a divorce from him and then told the media and her fans that her new boyfriend is a businessman from Mysore named Adil.

In a New Shark Tank India Promo, Namita Thapar Leaves and Tells Anupam Mittal to Put His “Ego in Check”!!