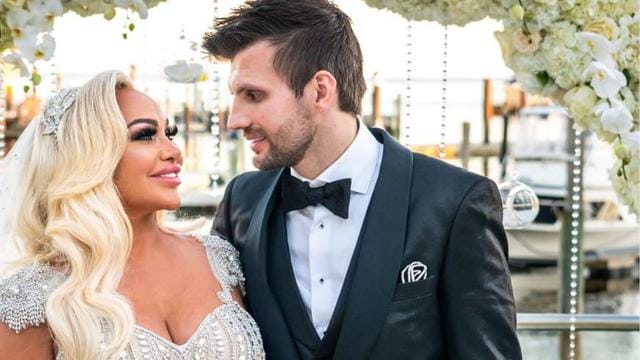 “This is the moment we’ve been looking forward to,” Silva, 48, tells PEOPLE. “We’ve been together for eight years and have been through a lot, but our love has endured. We’ve arrived. We did it. It’s breathtaking to say our vows in front of family and friends.”

The couple, who met on Instagram, married for the first time in April 2020 in a small ceremony with just the two of them and their officiant.

“Even though everyone was on lockdown at the time, it was very special and unique. We wanted to keep everyone safe and do things correctly, just like the rest of the world, but our love couldn’t wait any longer “Silva claims “We’ll never forget that moment because it was so personal. But we’ve always desired a fairy-tale wedding.”

Danielle Rothweiler, a wedding planner, was hired by the couple to plan their “modern, chic” nuptials. The ceremony and reception were decorated with white, pale pink, and ivory accents, as well as plenty of candlelight and crystals.

“Stacey loved the idea of an all-white vibe throughout the day,” says Rothweiler, “so we incorporated gorgeous white florals in the ceremony, cocktail hour, and reception.” “She wanted it to feel intimate and special so that they could finally share their marriage with their closest friends and family.”

The five-tiered red velvet cake had a white chocolate cream cheese filling and a rhinestone border. “We chose red velvet because it represents love,” Silva explains.

Katerina Bocci, an Albanian-American designer, created the bride’s gown. “Her gowns are very haute couture,” Silva says. “She just made my dream gown a reality. It’s the most beautiful, spectacular gown I could have ever imagined.”

As the couple begins to plan their honeymoon — “somewhere tropical and beautiful,” Silva says — they are still savouring every moment of their special day.

“We’re happier than we’ve ever been,” she adds. “It just felt right when we said our vows.”

Silva’s wedding preparations, as well as the wedding ceremony itself, can be seen on the new season of Darcey & Stacey, which premieres on TLC on January 23 at 8 p.m. ET.