Rakhi Sawant, who likes to stir up trouble, has been in the news lately because she got married to Adil Durrani. The actress said recently that they have been married for seven months and are having trouble because the actor's family is still not ready to accept her. 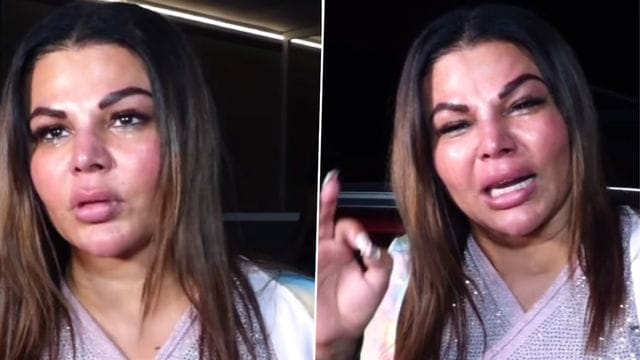 Rakhi Sawant, a controversial Bollywood star and reality TV star, is getting married to her long-time boyfriend, Adil Durrani Khan. This has been making headlines. The fight she had at her wedding with her boyfriend Adil Khan has once again made it into the tabloids and entertainment sites.

Adil had denied getting married to Rakhi and said it was a “fake” wedding, but he later agreed that the two are married and have been living together. A few days ago, photos of Adil and Rakhi went viral. In one of the pictures, it said that they got married in 2022 on their marriage certificate.

On Saturday, the paparazzi saw Rakhi in Mumbai. As she talked about her wedding with Adil, she looked very sad. The actress said that her mother is in the hospital and that she couldn’t imagine what her mother would do if she knew about her marriage problems. As Rakhi talked about the problems in her life, she was seen crying uncontrollably. She also said that she talked with Adil’s family and that they were very helpful.

In another video, Rakhi Sawant was caught on camera making a panicked phone call to someone. She asked, “Why has Adil not been accepting their marriage?” On the call, Rakhi says that Adil can’t refuse to take her as his wife because the court has already approved their marriage.

The actress has always been open about her personal and professional life. She may have hinted that her husband cheated on her while she was away filming “Bigg Boss Marathi.” She was said to have said, “While I was locked up in the Bigg Boss Marathi 4 house, a lot happened. When the time is right, I will talk. Now, all I want is for my marriage to stay together.

I want everyone to know that Adil and I are married. Main bahut pareshan hoon isliye logon ke saamne meri shaadi aana zaroori hai. I don’t know why he is keeping our wedding a secret. I told him this morning that this is further but not too far, and it’s time for me to announce that we’re getting married. Is he afraid of his mom and dad? Or is he doing this because he married a Hindu girl?”

Rakhi’s lawyer recently broke her silence on the scandal, accusing her husband Adil of cheating on her. Rakhi’s lawyer told Telly Masala that she and Adil are legally married and that Adil cheated on her while she was in the ‘Bigg Boss’ Marathi home.

Telly Masala was informed “Adil ne unke peeche se kuch aisi harkate ki, cheating ki, aur kuch unke discussion hui jiski vajay se Rakhi ko laga ki y sahi time hai ki mai expose karu (As far as I know, Adil cheated on Rakhi when she was inside the Bigg Boss house. They then had a talk since Rakhi believed it was the appropriate moment to reveal that they were married).”

Did You Admire Harnaaz Sandhu’s Magnificent Multicoloured Lehenga During Her “Desi Girl” Moment on the Miss Universe Stage? What’s the Price of Lehenga? Know Here!