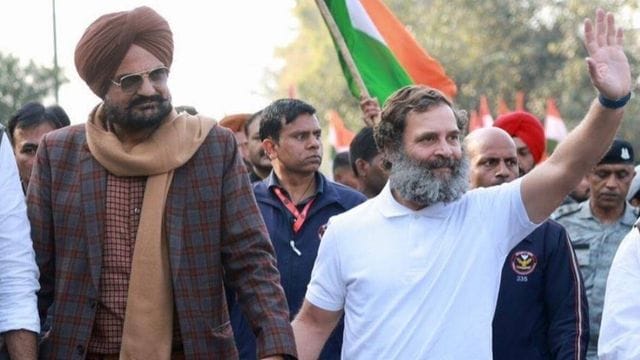 After attending the funeral for the late Jalandhar MP Chaudhry Santokh Singh on Sunday afternoon, Rahul Gandhi resumed the Bharat Jodo Yatra, and he was soon joined by Balkaur Singh, the father of the murdered Punjabi musician Sidhu Moosewala in May.

Formally attired, Singh strolled alongside Rahul for a while. They appeared to be having a conversation. Balkaur Singh then gave Rahul a portrait of Moosewala as a present as well. Last year, after Moosewala passed away, Rahul paid a visit to Balkaur Singh in Moosa village to express his condolences.

In a Facebook post, Rahul praised Singh, writing, “Famous Punjabi singer and Congress leader, Late. Balkaur Singh ji, who is Sidhu Musewala’s father, went to the yatra in Jalandhar today. I thought he had a lot of courage and patience. He is very proud of his son, and he loves him very much. I applaud a father like that!”

Before starting the Yatra again at 3 p.m. on Sunday, Rahul paid his respects at the historic Devi Talab Mandir.

The temple is dedicated to Goddess Durga and is thought to be one of India’s 51 Shakti Pithas. Former Prime Minister Indira Gandhi liked the temple a lot. It’s also where the historic Harivallabh Sangeet Sammelan is held, which is a big deal for classical musicians. In December of last year, the 174th Harivallabh Sangeet Sammelan was held at the temple.

He had met a professor who had done a study on drugs and they had agreed to keep talking even after the Yatra.

Congress’s official Twitter account posted a video and said that Balkaur and Rahul “gave a fitting response to the forces spreading hatred, fear, and violence.”

A well-known expert on agriculture and food, Devinder Sharma, also took part in Yatra and walked with Rahul Gandhi. Sharma, who writes a lot about farming, was very against the three farm laws. Sharma is a strong supporter of diversification, but he thinks that farmers need good help from the government and that they need experts to hold their hands.

He was asked questions by Rahul. During his Punjab leg, the Gandhi grandson has met a lot of people with important ideas.

Selfie First Look: Selfiee is an Adaptation of Driving Licence, a 2019 Malayalam-language Comedy-Drama!!