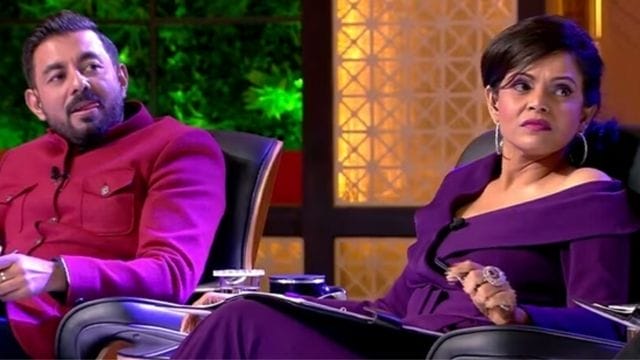 In a future episode of Shark Tank India, Namita Thapar, Amit Jain, and Peyush Bansal will fight over a business deal. It happens when a “pitcher” asks for money on the show for his product, which is a device that pregnant women and their babies can wear to track their vital signs. The device is powered by artificial intelligence (AI). Sony Entertainment Television posted a preview of the episode on social media, calling it a “cold war” between the sharks.

In the commercial, the CEO of a pharmaceutical company, Namita Thapar, gets excited after the pitch. She tells the pitcher right away, “This is my deal” (Yeh mera deal hai). Then, Peyush and Amit put their hands together over the same pitch. Peyush tells Namita that she can also join them in the deal.

Namita turns down the offer of a joint deal and says, “I want to go alone.”( mujhe solo jana hai) Amit steps things up and tells the pitcher that they are ready to close the deal on his terms. Namita fights back, and from her side, she doubles the offer. Amit asks the pitcher, “Dhanda banwana hai?” (Do you want to do business or not?) in a way that seems to be making fun of Namita’s offer.

In response to the new ad, a user wrote in the comments, “Namita is definitely adding glamour and TRP to the show… and don’t forget that she’s a very smart business owner.” “Why is she being so rude?” asked someone else.

The idea for Shark Tank India came from the popular show Shark Tank USA, which has the same name. The show is back with a new season after its first season went well. Rahul Dua, a comedian, is in charge of Season 2.

Get more updates from Bollywood, Hollywood, Music and TV Show along with the latest entertainment news at New Times Of India.