In the most recent episode of Shark Tank India Season 2, an emotional scene was seen by the audience. 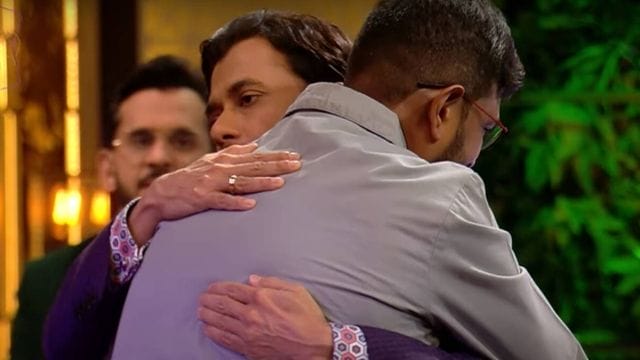 The episode starts with Himanshu Adlakha and Nikita Adhlaka making the first pitch. The couple showed off their brand, which was a line of beauty tools that could be used at home. Basically, they got their products from the China market, changed their names, and sold them. They asked for Rs 1 cr for it, which included 4% equity.

After Anupam Mital asked them about how they met and got married in an arranged marriage, the Adlakhas went on to tell their story. Nikita says that Himanshu was the first person she met in a set-up like this. Her parents liked him and told her to go for it.

Himanshu, on the other hand, says they met through a middleman and he liked her photo a lot. Nikita then said that she didn’t know what would happen at an arranged meeting, but everything went well and they both decided to get married.

Namita decided not to take part in the deal because she didn’t like the products. She said that there is a lack of trust because the products were imported, which is why she is no longer part of the agreement. Anupam, on the other hand, says at first that he doesn’t fully understand the model’s idea.

Aman Gupta tells the pitcher that he can’t make an offer because he is also a brand and will be competing with them for business. Instead, he just wishes them luck.

But now that he knows more about how the business works, he offers a deal, and Vineeta Singh wants to be a part of it. Anupam and Vineeta’s offer of 1 crore with 10% equity is accepted by the pitchers.

Ganesh Balakrishnan is the next pitcher, and he talks about his brand, which makes great shoes out of fibers that let air in. Ganesh then talked about his business plan and how it was going to be stopped. He also says that 33% of his angel investors no longer want to put money into his business. He also wants to sell his products on the international market. Ganesh starts to cry when he talks about how hard he has worked to run his business.

Anupam is interested in his private life. The pitcher says that he is married and has a daughter who is 10 years old. When sharks hear his story, they get emotional, and Anupam gives him a job at his place. Peyush and Vineeta offer Rs 75 lakh for 33.3% of the company’s stock. But Ganesh turns down the offer in the end.

Bigg Boss 16: Tina Datta Calls Her Close Friend and Fellow Candidate Shalin Bhanot “Abusive” and Says She Wants to “Step Back” From Their Connection!!

Local Health Authority in China Claims That 90% of the Population Has Been Infected With COVID-19!!