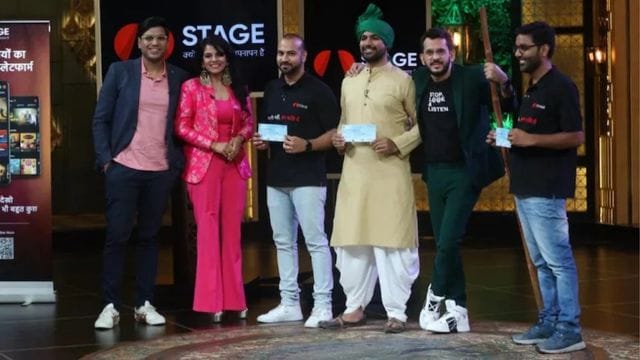 Most business owners run into problems, like not having enough money or being close to going out of business. But everything comes down to how they deal with these problems and come out stronger. Aman Gupta, an investor on Shark Tank India and the co-founder and chief marketing officer (CMO) of the wearables brand boAt, said in a recent LinkedIn post that he has had more “downs” than most people realize.

Gupta also said that when people hit rock bottom, they have no choice but to work hard and get back up. He told entrepreneurs to keep working hard. The co-founder of boAt also said that he is inspired by the spirit of entrepreneurs who work through hard times to make it big, as well as by people in general who have an entrepreneurial and positive spirit.

In his post, Gupta said, “In fact, we all face downs. I’ve been sad too, probably more times than you can think of. But when you’re at the bottom, there’s only one way out: up. Keep working hard, because the day you give up is the day you fail. Not just by the spirit of these entrepreneurs, but by the spirit of all people with an entrepreneurial and positive spirit that lasts.”

When two of the founders of STAGE hear this, they say yes and get teary-eyed. Gupta then says, “Six of my businesses failed, and that’s when boAt was made.”

Gupta, who is also the CMO at boAt, tells the other founder of STAGE, “You have built a Rs 300 crore company. I think you are entrepreneurs’ best hope. They will look at you and say,  ‘Boss jab gir ke banda Rs 300 crore ki company bana sakta hai na to isse jyaada kuch nahi chahiye.’  At the end, Gupta says, “I’m not just giving money. I’m doing it for India.”

STAGE was started by Vinay Singhal, Parveen Singhal, and Shashank Vaishnav. Lenskart CEO Peyush Bansal, Gupta, and Emcure Pharmaceuticals Executive Director Namita Thapar gave the company Rs 3 crore in debt and equity at a valuation of Rs 250 crore. Blume Ventures, Better Capital, and other well-known investors have also given money to the startup.

The second season of Shark Tank India began on January 2 on Sony TV, the SonyLIV app, and the SonyLIV website. On the show, there is a group of investors or “sharks” who listen to pitches from aspiring business owners and then put money into those businesses. On this show, the sharks are boAt Co-Founder and CMO Aman Gupta, Emcure Pharmaceuticals Executive Director Namita Thapar, Lenskart CEO Peyush Bansal, Shaadi.com founder Anupam Mittal, SUGAR Cosmetics CEO Vineeta Singh, and CarDekho founder Amit Jain.

The Actor Shares His  Photos of Disha Patani and Aleksandar Alex Ilic: Here Are Five Pictures of a Rumoured Couple That Went Viral!!