Sunday night, Suhana Khan and Gauri Khan were seen at a friend's house in Bandra. Fans liked how simple Suhana looked when she didn't wear make-up. 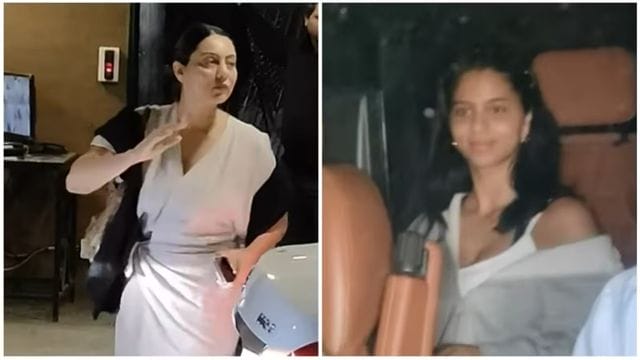 On Sunday evening, Suhana Khan and her mother Gauri Khan were seen at a friend’s house. Suhana wasn’t wearing any makeup and was just wearing a white vest, a grey jacket, and black pants. Her fans liked how she looked without makeup after she went to a few fancy parties around the New Year.

On Instagram, a paparazzo account posted a video of Suhana Khan sitting in a car while Gauri came out of her house to join her. Gauri wore a soft pink dress that came to her knees and carried a jacket. While Suhana was sitting comfortably in the car, the paparazzi kept taking pictures of her, so she took her jacket off.

A fan said about the video, “No matter what, Shah Rukh’s daughter always looks decent. There’s no drama, and she’s not looking for attention.” Another person said, “Yes. I also think she is humble. Even though she is the daughter of Bollywood’s biggest star, she is more modest and kind than other nepotistic children. A fan also said, “She actually looks quite pretty when she doesn’t have all that makeup on her all the time!” A comment also said, “People will surely like her because she is a great actress.”

Suhana’s first movie will be The Archies, which is being made by Zoya Akhtar. She will play the role of Veronica in the movie. Agastya Nanda, grandson of Amitabh Bachchan, and Khushi Kapoor, sister of Janhvi Kapoor, will also make their film debuts in the movie. This year, you’ll be able to watch the movie on Netflix.

Gauri Khan, her daughter Suhana, and her son Aryan Khan were seen at Kajal Anand’s birthday party the day before. Gauri was wearing a beige dress, and Suhana had her hair tied in the back and wore a short black dress. She and Aryan are often seen at events and movie screenings together. Aryan is also getting ready to start his career as a writer and director. He has already finished writing a web series, and this year he will start making it.

An Entrepreneur From “Shark Tank” Claims She Was Harassed In The Cyberworld: “Rude,” “Smug,” “Manupulative,” “Greedy,”, “Bitch”