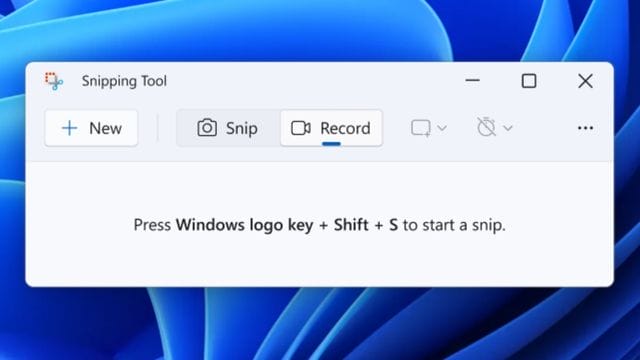 Through the Snipping Tool, Microsoft is finally integrating a built-in screen recorder to Windows 11, allowing users to take films off their desktop without the need for a third-party app.

The update will be available once Snipping Tool version 11.2211.35.0 is installed as part of a phased rollout to Windows Insiders in the Dev Channel. To use the new functionality, Windows Insiders simply launch the app and select the new Record option at the top of the screen.

“You will then be able to select and refine the section of your screen that you wish to record before beginning your screen recording session,” explained Dave Grochocki, Principal Product Manager Lead at Windows Inbox Apps.

“When you’re through, you can listen to or share your recording with others.” The firm is also aware of known concerns that may have an impact on the user experience for those who have previously accessed this preview functionality.

Some users may notice a tiny delay between the time they press the “Start” button and the start of the recording. Others will notice that after starting a fresh snip from within the program, the Snipping Tool app window fails to restore itself.

Because the Snipping Tool is an ‘inbox’ app, which are applications that are automatically installed by default in Windows, all users will soon be able to use this function without having to install additional Microsoft software.

Please be patient if you are on the latest Windows 11 Developer release and do not yet have the new screen recording feature in the Snippet Tool. It is progressively trickling out.

How to Record the Screen of a Laptop Running Windows 11?

To begin, launch the Snipping program on your laptop. You’ll notice a new record option here. According to Microsoft, users will be able to adjust the portion of the screen that they want to record before beginning the screen recording session. Users will be able to evaluate recordings before saving or sharing them with others.

The feature preview is being made available to Windows Insiders via the Dev Channel. According to Microsoft, users may encounter a few bugs that will influence their experience with this preview. Some users, for example, may notice a tiny delay between when they click “Start” and when the recording begins.

A known issue is that the Snipping Tool app window does not restore when starting a fresh snip from within the app. Users can provide feedback via the Feedback Hub (WIN + F), Apps > Snipping Tool.

Gary Friedkin, Actor in ‘Young Doctors in Love,’ Died at the Age of 70 From Covid Complications, According to His Publicist!!

Georgia Holt, an Actress and Singer Who Was Cher’s Mother, Passed Away at the Age of 96!!