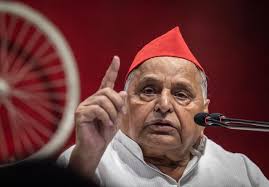 He was considered a key component in opposition politics, though ill health forced him out of the limelight on the national stage for the last few years.

Yadav, also known as ‘Netaji’ among his followers and party workers, is survived by Akhilesh Yadav, who is currently the SP chief and also a former chief minister of UP. Akhilesh is the son of the SP patriarch’s first wife Malti Devi, who died in 2003.

Yadav, who began as a wrestler – switched over to school teaching before taking a final plunge into politics. He was elected to the Legislative Assembly in Uttar Pradesh eight times from 1967 to 1996. He was also elected to Lok Sabha seven times since 1996, as he continues to be a member of the lower house.

Yadav became a minister for the first time in Uttar Pradesh in 1977. He also held the position of Lok Dal president in 1980 and for a period of two years- 1985-87 he was the chief of Janata Dal in Uttar Pradesh.

In 1991, as BJP-led Kar sevaks threatened to march towards the disputed Babri mosque in Ayodhya, in a Time Magazine interview he said the mosque will be attacked, over my dead body. He ordered firing on Kar sevaks and earned the sobriquet mullah Mulayam.

Later, Mr. Yadav established a reputation for partnering not just with his friends, but also with his rivals, his association with Bahujan Samaj Party (BSP) leader Mayawati for a short-lived alliance government in UP being a clear case in point.

According to Medanta Hospital, Mulayam Singh Yadav had serious lung and kidney issues. He had reportedly been facing difficulties in breathing.

Interestingly, till the late 1980s together with his political mentor Charan Singh, Yadav never lost an opportunity to criticize Indira Gandhi for promoting a dynasty. But later on, he became flexible and indulged in promoting his son Akhilesh Yadav and other members of his family in politics, as he formed his own Samajwadi Party in 1992.

In Oct-Nov SBI will auction of NPAs of 746 crore