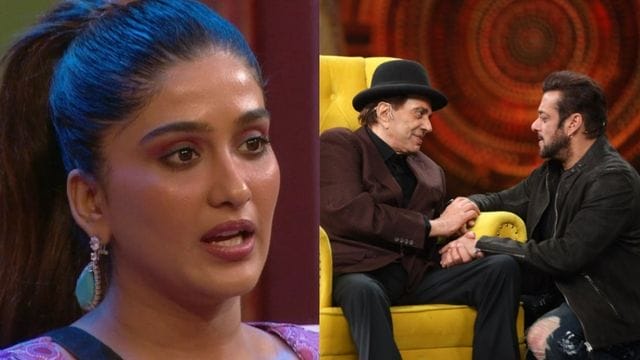 During the episode of Bigg Boss Season 16 that aired on Saturday, presenter Salman Khan welcomed veteran actor Dharmendra as the two of them celebrated New Year’s eve with the contestants. Karan Kundrra was another person that joined the house and performed games with the players. These games let the contestants divulge their secrets.

Nimrit Kaur Ahluwalia, who was perturbed by the changed behavior of her close friend Abdu Rozik since he came home, shared her feelings with Salman Khan during their conversation. Keep reading to get the most important takeaways from the Big Brother 16 episode titled “Weekend Ka Vaar”:

Salman addressed the issue, saying, “You stated that Abdu’s behavior toward you had changed when he returned to the house. You even mentioned losing a friend. He has evolved.”

Nimrit responded, “I have. Abdu will not approach me if I am alone. Even when we sit in a group, he becomes uncomfortable with my presence. I, Shiv Thakare, and Sumbul Touqeer Khan were in the Captain’s room the day before. He didn’t even bother to wish me a good night. He wished them good night but ignored me as if I didn’t exist.”

In response, the Dabangg actor stated, “Your entire group was telling Abdu not to say ‘Nimmi Nimmi’ anymore. For the last 2-3 weeks, Abdu has been convincing everyone that he only has friendly feelings for you. Why are you upset when he treats you like a fellow contestant? You all tortured Abdu to keep him away, and now you claim to be hurt.”

“You never played on your own. You are visible because of your’mandli’. Because of Abdu, you were the topic of conversation in every house. What has happened is that your spotlight has faded since he began to distance himself from you.

Salman Khan addressed Sajid Khan’s assumptions about Abdu’s changed behavior in a shocking revelation. He stated, “You’ll be surprised to learn that Abdu’s team hasn’t told him to stay away from Nimrit. Nimrit’s mother called and spoke with him.”

Nimirit was taken aback when he heard this and attempted to question Abdu about it. Abdu agreed to this after Nimrit’s mother called him the day before the show and refused to tell him anything else.

Dharmendra Appears on the Show