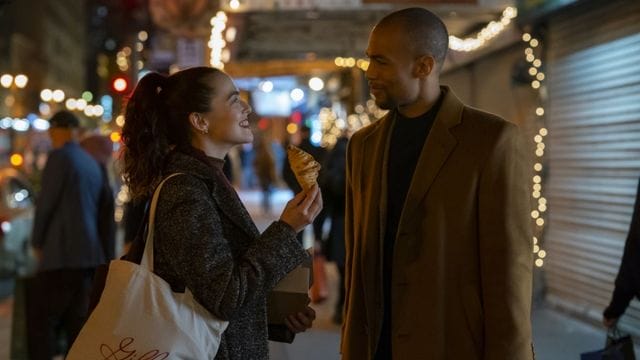 Something from Tiffany’s is an upcoming American romantic comedy film directed by Daryl Wein from a screenplay written by Tamara Chestna and based on Melissa Hill’s novel of the same name. The film, starring Zoey Deutch, will be published on Amazon Prime Video on December 9, 2022.

The trailer for Prime Video’s Something From Tiffany’s debuted on Tuesday, bringing with it festivity, romance, and humor just in time for the Christmas season.

Rachel, played by Deutch, discovers how an engagement ring mix-up may lead to unexpected romances in New York City during the holidays. Rachel and Gary, as portrayed by Nicholson, appear to have a strong connection but aren’t quite ready to make a major commitment. Ethan and Vanessa, played by Sampson and Mitchell, on the other hand, are ready to make things official.

But when a Tiffany & Co. special box gets jumbled up and switched with another present, unlikely paths cross. In the teaser, Rachel’s friend, Leslie, comments, “I know something when I see something, and that wasn’t nothing.” And what she was witnessing eventually leads to a romantic twist.

The film follows the journey of the leads as they try to find who they are truly meant to be with the help of traditional holiday lights and enchantment.

On October 30, 2021, it was announced that Zoey Deutch would star in and executive produces Something from Tiffany’s, based on Melissa Hill’s novel of the same name.

Hello, Sunshine will be produced by Reese Witherspoon and Lauren Neustadter in collaboration with Amazon Studios. It will be the first film adaptation of Tamara Chestna’s novel Hello Sunshine.

The trailer hits all the right notes for a holiday romance. It’s set in New York City around the Christmas season, the female lead has a horrible boyfriend who is simple to cheer against at the start, and so much more!

These films are so regularly set in New York that it has become a genre hallmark. It wouldn’t feel right if it was placed anywhere else! Furthermore, the intensity of Christmastime often takes films like Something From Tiffany’s to a whole new level.

Also, these types of movies are a lot more entertaining to watch when the main characters’ initial partners are dreadful, making it all the more satisfying when they get dumped at the end. According to the brief glimpse we got of Rachel’s boyfriend in the trailer, it will be a lot of fun to see him be dumped.