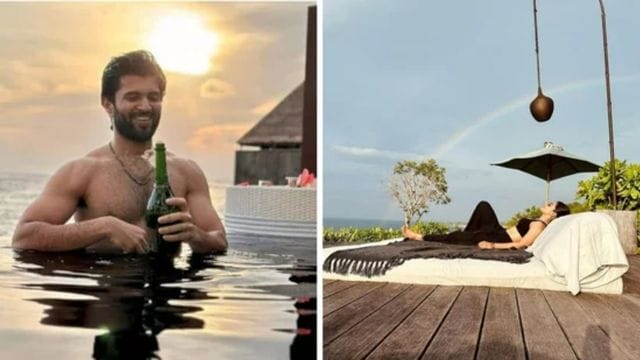 There have been rumors for years that Vijay Deverakonda and Rashmika Mandanna are dating. Even though both stars say they are good friends, they are often seen on vacations together. They don’t post pictures, but they are always in the same places. People think that Vijay and Rashmika celebrated the start of the year 2023 together.

The actress decided to hang out with her fans. Fans think they heard Vijay Deverakonda’s voice in the background when Rashmika Mandanna did an Instagram live session. When you hear a man’s voice, she was telling her fans how old she was. Several fans posted the clip on social media.

Last year, on Koffee With Karan 7, Vijay said that he and Rashmika are “good friends.” He said, “We’ve worked together on two movies when I was very young. She is so cute, and I really like her. We get along really well. We share a lot of highs and lows through movies. “A bond is formed.”

It’s also said that they rang in the New Year of 2022 together. Rashmika and Vijay have worked together on two movies: Geetha Govindam and Dear Comrade.

Vijay was last seen in the pan-Indian film Liger, which starred Ananya Panday and was also his first movie in Bollywood. The movie didn’t do well at the box office because people didn’t like it. The next movie the actor will be in is Kushi, which will star Samantha Ruth Prabhu. Rashmika was last seen with Amitabh Bachchan and Neena Gupta in Vikas Bahl’s film Goodbye.

Along with Abhishek Khan, the movie was her first in Bollywood. Pavail Gulati, Elli Avram, Sunil Grover, and Sahil Mehta also had roles in the movie. Rashmika will next be seen with Sidharth Malhotra in Mission Majnu, with Ranbir Kapoor in Animal, and with Vijay in Varisu.

Who is Shawn Johnson? Is She Still Alive?| Death Rumors

Is EDP445 Still Alive? Why He Was Banned From Social Media?

Is Tracy Brown Bering Still Alive? What Happened to Her?