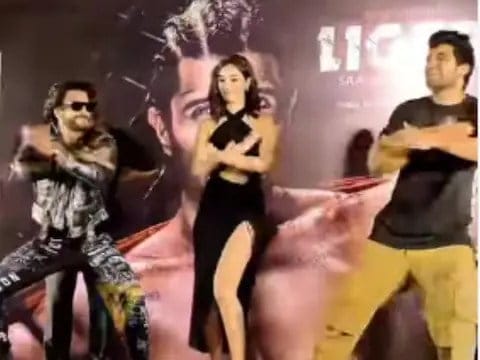 Ranveer Singh is in the headlines again. Now Ranveer’s nude picture in the headlines has created a stir due to his look and outfit. But in all this, a video is going viral on social media, due to which ‘Baba’ is also popular on social media. The video coincides with the trailer release of ‘LIGER’, where Ranveer is seen alongside the film’s lead actor Vijay Devarakonda and actress Ananya Pandey.

While many videos and pictures are going viral on social media, a video is going viral on social media, in which Ranveer Singh, Vijay Devarakonda and Ananya Pandey are seen dancing on stage. But if you watch the video carefully, you will realize that Ananya has forgotten the dance steps of her own film’s song before the release of the film. In the video, Ranveer reminds Ananya about her dance steps.

We tell you that while Vijay is making his Bollywood debut with Leaguer, Ananya is making her debut in the South with these films. The film will release on August 25 in Hindi, Tamil, Malayalam, Kannada and Telugu.