Alia Bhatt, Ranbir Kapoor, and Raha Kapoor went for a walk in Mumbai with their daughter. Alia's sister Shaheen Bhatt was also in the picture. 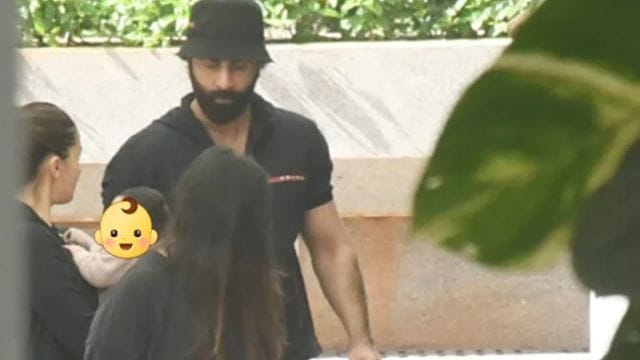 Alia Bhatt and Ranbir Kapoor’s daughter Raha’s first pictures are finally out! In November, Raha was born to Ranbir and Alia. Even though Alia posted a picture of the baby and her name on Instagram in November of last year, the Kapoors have kept the baby out of the spotlight. But the paparazzi were able to catch a glimpse of her, which was the first time the baby was seen in public.

The child was seen with her parents and aunt Shaheen Bhatt. Paparazzi took pictures of the baby, but they didn’t show her face because Alia and Ranbir wanted to keep her identity secret until she was older. As they got out of the car, Alia held Raha close and put the baby in a stroller.

“Today, the couple met with the paparazzi and asked them not to take pictures of their daughter. The couple worked hard to explain all the obvious reasons why their child shouldn’t be in the public eye. And most importantly, the couple told the photographers that they would let them take pictures of their baby at the right age and time. In fact, what Ranbir and Alia did was the right and best thing to do “Varinder revealed on Instagram.

Raha was born on November 6 to Alia and Ranbir. A few weeks later, she posted a picture of her and Ranbir holding their baby and telling the world that they had named her Raha. Alia said, “The name Raha, which her wise and wonderful Dadi chose for her, has so many beautiful meanings… In its purest form, Raha means “divine path.” In Swahili, it means “joy.” In Sanskrit, it means “clan.” In Bangla, it means “rest,” “comfort,” and “relief.” In Arabic, it means “peace” and also happiness, freedom, and bliss. And true to her name, we felt everything from the first time we held her “she typed.

Ranbir and Alia got married on April 14 of last year after dating for several years. At Ranbir’s house in Mumbai, only close family members and friends were invited to the wedding. Alia’s pregnancy was announced in late June of the same year. Alia had her baby on November 6. Later, they told them what her name means and said that Neetu Kapoor chose it for her.