Shobana Kamineni, who is the mother of Upasana Konidela and is married to Ram Charan, nailed the hook step of Naatu Naatu. Her "proud" daughter posted the video on Twitter. 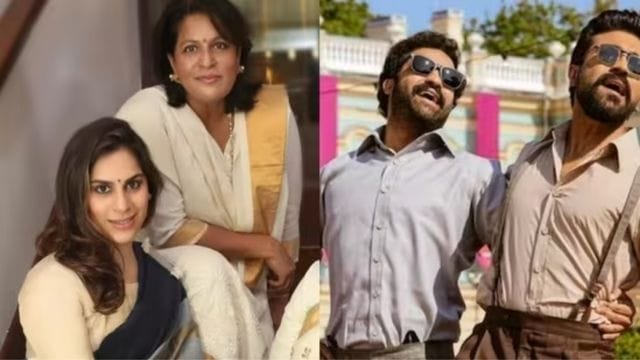 Ram Charan is enjoying the success of RRR, and his mother-in-law, Shobana Kamineni, recently did the hook step for the film’s song “Naatu Naatu,” which just won a Golden Globe. Upasana Konidela, who is married to Ram Charan, posted a video of her mother from the streets of Davos, Switzerland. Shobana is the executive vice-chairperson of Apollo Hospitals. She was at the World Economic Forum’s annual meeting.

Shobana can be seen tapping her foot and smiling in the video to the popular song. She also wore all black and a scarf with a pattern around her neck. During the spontaneous dance, she almost sang the song’s famous chorus.

Ram Charan’s mother-in-law told Money control about RRR’s success, “It’s been just amazing to see how many people have come out to see it. We thought the movie was great, but now that it’s getting praise from around the world, you’re giving a lot of Indians hope. I mean, if a Telugu song can help you win this, then any Indian can do anything.”

RRR by SS Rajamouli is still making history overseas. The movie Naatu Naatu, which starred Ram Charan and Jr. NTR, just won the award for Best Original Song at the 80th Golden Globe Awards. It was written by MM Keeravaani, and Rahul Sipligunj and Kaala Bhairava are the ones who sing it. Prem Rakshith made the dance that is now well-known.

RRR won two awards at the 28th Critics’ Choice Awards, in addition to the Golden Globes. It was for Best Song and Best Foreign Film. But it didn’t make it to the 2023 BAFTA Film Awards final shortlist. It was on the list of movies that could win the award for Best Film Not in the English Language.

All eyes are now on RRR’s chances at the Oscars because it has made the shortlist for Music (Original Song). With this, many people hope that it will also get a nomination for Best Picture. On January 24, the final list of nominees will be made public.

Stay tuned to New Times Of India for more Entertainment News and bookmark our website so that you can’t miss any updates.