Rakhi Sawant Accepted Islam and Wants to Do Umrah With Adil. Watch Videos of Rakhi! 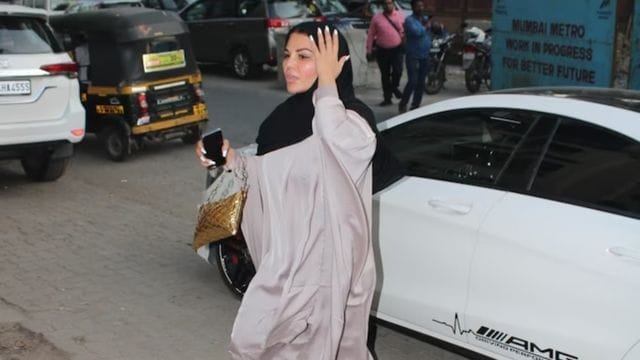 Rakhi Sawant, the queen of trouble, is doing everything she can to get the attention of the media. The actress recently told her fans and followers that she was getting married to her boyfriend, Adil Khan Durrani. However, a video of her in a burqa surprised them again.

On Wednesday night, Rakhi Sawant and Adil Durrani went to the hospital to see her sick mother. She wore a beige abaya and a black hijab. For those who don’t know, Rakhi’s mother is getting treatment in Mumbai for a brain tumour. Check out the video.

After announcing that she was getting married, Rakhi also said that she had converted to Islam and changed her name to Fatima Durrani. Rakhi Sawant and her boyfriend Adil Khan got married in a small Nikah ceremony on May 29, 2016.

On the job, Rakhi Sawant was last seen in season 4 of Bigg Boss Marathi. She went on the show as a challenger and made it all the way to the final round. She decided to drop out of the race and take the cash prize of Rs 9 lakhs.

Raki Wanted to Do a Ritual With Adil

After she got married to Adil Durrani, Rakhi Sawant changed her name to Fatima. Since the actress talked about it, the pictures of their secret wedding have gone viral on social media. Recently, Rakhi Sawant was seen going to the hospital to see her sick mother while wearing a hijab. Now, the actress has said that she wants to do Umrah.

In a new video by Instant Bollywood, the actress said that Umrah is a very important step for her and Adil, and that they want to start their journey together by asking Allah for blessings. The whole talk started when the couple was asked what they had planned for their honeymoon after the wedding.

In response, the Internet celebrity said, “Pehle Umrah Jayenge. Woh bahaut zaroori hai, wahan ek baar rishta pakka hogaya toh koi nahi tod sakta. Jo rishte Allah jodte hain woh koi insan nai tod sakta. (We will first do Umrah. That’s very important, because once the relationship is sealed there, no one can break it. No one can break the bonds that Allah puts in place.

A shy Adil said, “Jayenge” after a quick laugh. There are many things going on right now. (We will go, but first some things will happen, and then we will go.)”

Making Plans to Hit the Gym and Lifting Weights? Take the Time to Have a Heart Scan First! Know Why!