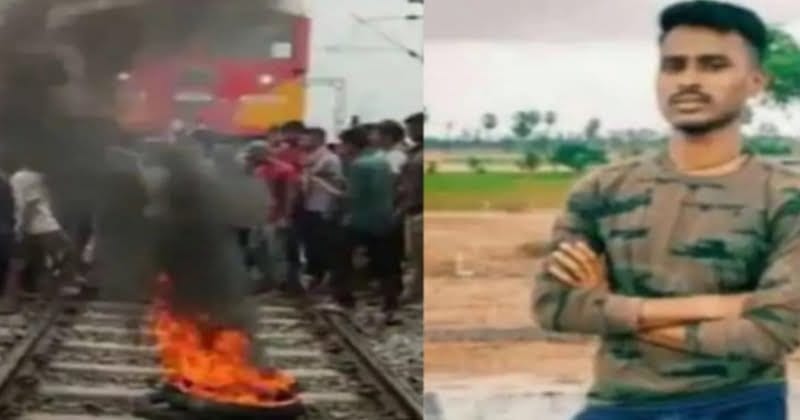 Protests are taking place across the country regarding Agneepath. Violence has happened in every part of the country. Trains were set on fire. On the other hand, the place is being set on fire and stones are being pelted. The youth have taken to the streets to protest. There is a bubble scare in Telangana too. During this, a youth was killed in police firing. The young man was preparing to join the army and took to the streets to protest. He was killed in police firing at Secunderabad railway station. The young man’s sister is serving in the army. The farmer’s son D. Rakesh (22) was a resident of Dabirpet in Warangal district of Telangana. Rakesh was studying in his final year of graduation in Hanamkonda, got selected for army recruitment six months back and is currently preparing for written exam. Apart from the parents in the family there is one sister and one brother. His sister is said to be serving in the army. Rakesh was one of the youths who had reached Secunderabad railway station from different parts of Telangana and were protesting against the Agneepath project. Opponents say the new plan will dash their hopes of joining the army. The protesters resorted to violence, setting fire to trains and other railway equipment and vandalizing the station. Railway police opened fire to bring the situation under control. Rakesh, who was injured by bullet injuries, was admitted to Gandhi Hospital in a critical condition. Doctors said that they tried CPR to save him but he did not survive.

Rakesh’s death has come as a deep shock to his father Farmer Kumaraswamy and mother Poolamma and other members of his family. Hearing the news of Rakesh’s death, he reached Hyderabad. The officials handed over the body to his relatives after the postmortem at Gandhi Hospital. Apart from this, 12 other injured youths have also been admitted to the hospital. Doctors said they are trying to find out if he has taken pills. All the injured are from Telangana except Jagannath Rangaswamy, a resident of Kurnool in neighboring Andhra Pradesh. He is identified as Rakesh (Karimnagar), J. Shrikant (Mahbubnagar), Distt. Parashuram (Kamareddy), A. Kumar (Warangal), P. Mohan (Kamareddy), Narendra Babu (Khammam), L. Vinay (Mahabubnagar), Vidya Sagar (Asifabad), Mahesh (Vikarabad), Laxman Reddy (Nalgonda), and Bharata (Nirmal).