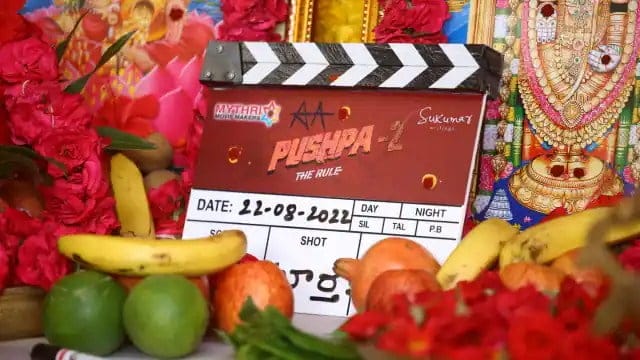 Allu Arjun and Rashmika Mandanna starrer Pushpa: The Rise is one of the biggest hits of 2021. The film grossed Rs 350 crore at the box office. The craze for ‘Pushp’ was seen everywhere. The dialogues of his songs are on everyone’s lips. After the success of ‘Pushpa’, the wait for the next part of the film has started. Here is a good news for the fans. The team performed pooja before the shooting of the film began. Director Sukumar and others were present at the time.

‘Pushpa’ managed to achieve pan India success with its craze across the country.

This film also became a huge success in Bollywood. The Hindi version collected over 100 crores and made Allu Arjun a pan-India star. Many celebrities praised Allu Arjun and Sukumar after watching the first part of the film. After that, the fans were waiting for a long time for the shooting of the second part of the film to start. This time the production house announced this good news.

On Monday morning, the makers started the Pooja formalities of the much awaited ‘Pushp The Rule: Part 2’.

Allu Arjun is abroad. Due to which he could not participate in the puja. The shooting of the sequel will start soon. Its story is written by Sukumar and produced by Maitri Movie Makers.

Puja’s pictures were shared from Pushpa’s official social media page. Along with the caption, ‘#PushpaTheRule highlights of puja ceremony.’

Also read: In the presence of Allu Arjun, the Mayor of New York did Pushpa!

Maharashtra: Commission is being considered to fill vacancies in government medical colleges