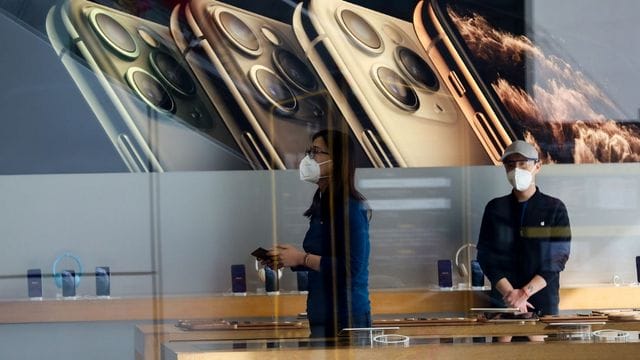 On Wednesday, videos showed hundreds of workers walking on a road in broad daylight, with some being accosted by riot police and some wearing hazardous suits. Some films showed workers complaining about the meals they were given, while others said they had not received their promised incentives.

As smoke billowed from the truck, one worker pulled a metal roadblock down the ground, as a streamer in the backdrop said, “They are rushing in! Bombs of smoke! “Tear gas!” exclaimed AFP.

One daytime photo revealed the charred remnants of a gate that had evidently burned down during the night.  Reuters was unable to confirm the validity of the footage right away. Foxconn did not reply quickly to a request for comment.

By Wednesday, the Weibo hashtag “Foxconn Riots” appeared to have been banned online, however some text posts citing large-scale protests at the Foxconn factory remained live. With 200,000 employees, the Zhengzhou plant is the world’s largest iPhone factory.

Since the end of October, a significant number of workers have absconded, and their escapes have been documented on social media, as dissatisfaction grows regarding the manner in which employees are treated and the manner in which Covid cases are handled, including what the workers claim to be insufficient provisions of food.

The firm started a campaign to urge workers to remain with the company and to recruit additional staff, promising greater hourly rates and bonuses as part of their effort to restart production.

Because of the issue with Covid in Zhengzhou, the firm has kept what is known as closed-loop operations at the plant. This is a system in which employees live and work on-site and are segregated from the rest of the world.

The production has suffered as a result of the restrictions and customer dissatisfaction, which prompted Apple to announce earlier this month that it anticipated decreased shipments of premium iPhone 14 models.