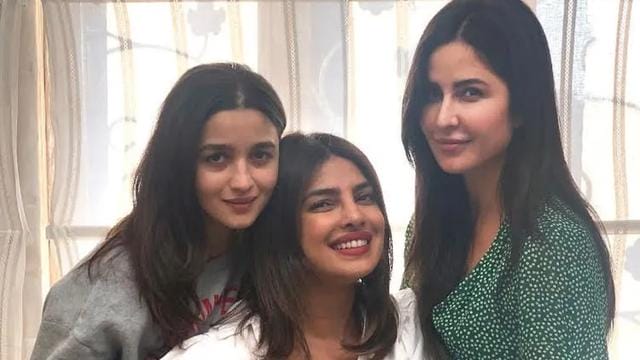 Priyanka Chopra spoke with the media about a variety of topics, including Jee Le Zaraa, in which she co-stars with Alia Bhatt and Katrina Kaif.

Priyanka Chopra reveals she called Alia Bhatt and Katrina Kaif for Jee Le Zaraa and discusses the shoot.
Priyanka Chopra is one of Bollywood’s most popular actresses. She is not only a popular Bollywood star, but she also has a large fan base in Hollywood and has undoubtedly become a global icon.

Fans have been waiting for Priyanka to appear in a Bollywood film for a long time. She’ll be seen in Jee Le Zaraa with Alia Bhatt and Katrina Kaif. PeeCee discussed the film and how the three divas came on board during her recent India visit.

For those who are unaware, Priyanka Chopra will co-star in the road trip film Jee Le Zaraa alongside Katrina Kaif and Alia Bhatt. In an interview with PTI, Priyanka revealed that she was the one who contacted Alia and Katrina before Farhan or anyone else.

She stated that she first called the girls when she was sitting at home and wanted to do a Hindi movie. The actress also stated that she wanted it to be on women’s terms.

“My generation of actresses paved the way for the next generation of actresses to be the faces on the posters and sell movies. So I really wanted to gather my friends and say, “Let’s make a movie that will do well at the box office and be ours…” So the stars aligned, and we decided to go ahead with it. We hope to begin filming it next year “She stated.

Farhan Akhtar will direct the film starring Alia Bhatt, Katrina Kaif, and Priyanka Chopra. The film, which will be produced by Farhan and Ritesh Sidhwani’s Excel Entertainment and Tiger Baby and directed by Zoya Akhtar and Reema Kagti, will begin filming next year.

Priyanka Chopra is looking forward to the premiere of the Amazon original series ‘Citadel,’ which is produced by ‘Avengers: Endgame’ directors Anthony and Joe Russo.

Katrina is currently enjoying the success of her horror comedy Phone Bhoot, which she co-wrote with Ishaan Khatter and Siddhant Chaturvedi and released yesterday, November 4. Her upcoming projects include Merry Christmas with Vijay Sethupathi, Jee Le Zaraa with Alia Bhatt and Priyanka Chopra, and Tiger 3 with Salman Khan and Emraan Hashmi.

After Adidas Discontinued Yeezy Production, a Georgia Shoe Manufacturer Laid Off the Majority of Its Workforce