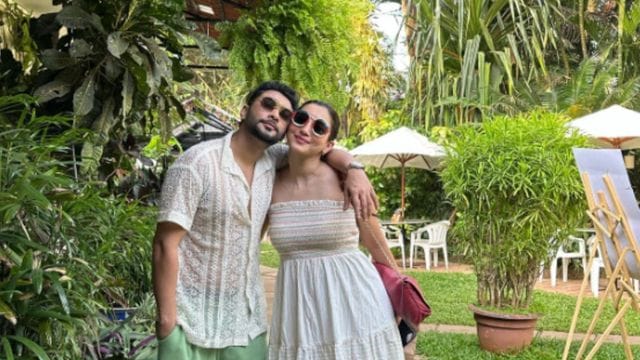 Pregnancy is regarded as both the most difficult and the most beautiful stage of a woman’s life. The gestation period is different for everyone in terms of physical and emotional health, but most expectant mothers try to remain as cheerful as possible during the nine months.

And if Gauahar Khan’s Instagram activity is any indication, she is thoroughly excited and enjoying this new adventure. The model and actress is expecting her first child with her husband Zaid Darbar this year, whom she married in a lavish ceremony in December 2020.

Gauahar looked absolutely stunning in the two photographs she uploaded from Goa, the pregnancy glow on her face visible. In one of the photos, the 39-year-old stood next to a swimming pool with a lot of greenery behind her, cradling her baby bump and smiling away from the camera.

Gauahar set a new trend for pregnant women by wearing a simple white dress with colorful stripes and no straps. Just above her ankles, the dress ended. The actress wore flat slip-on shoes and let her hair down. On one wrist, she wore a watch, and on the other, she wore a bracelet.

Gauahar’s face shone with the sun behind her. She didn’t wear much makeup, just a little blush on her cheeks and a nude shade of lipstick. Zaid, her husband, said, “Beautiful❤️”

Before that, she had shared more photos from her trip to Goa a few weeks earlier, in which she and her boyfriend posed together and set many travel-fashion goals. The post was called “sukoon mila” by Gauahar. In the pictures, Zaid wore a white shirt with a print and a pair of mint green shorts to match his pregnant wife. The look was finished off with a pair of white sneakers and a pair of sunglasses.

Namita Thapar of Shark Tank India Says She Has “No Regrets” After Being Chastised for “Mocking” !!”Samajhdar Ko Ishara Kaafi,” She Wrote in a Tweet on Tuesday