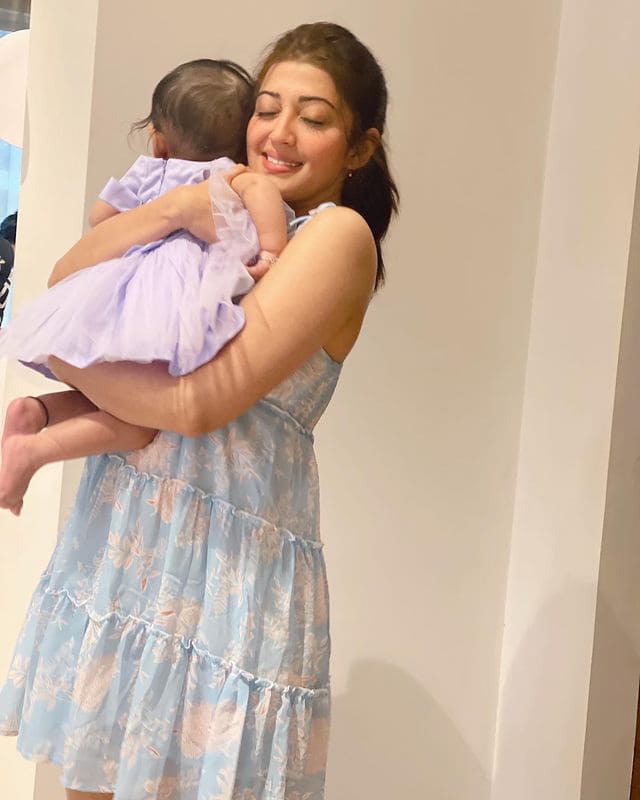 South Indian Actress, Pranitha Subhash is married to Nithin Raju. And on June 10, 2022, Pranitha embraced motherhood for the first time with the arrival of her princess, Arna into her life.

Pranitha tied the knot with businessman Nithin on May 30, 2021. Later, the couple announced the actor’s first pregnancy on Nithin’s 34th birthday.

She had shared a series of pictures of herself with her husband, showing her positive pregnancy test and ultrasound images. Sharing the life update, Pranitha added that she surprised Nithin with the news on his birthday. “For my husband’s 34th bday, the angels above have a present for us,” she wrote.

Currently, although the newbie mommy is seen fulfilling all her work commitments, she also never misses a chance to spend time with her family.

She has often been sharing cute pictures with her daughter on social media. Now she is seen showering a lot of love on her beloved daughter.

Pranitha made her film debut with the 2010 Telugu film Baava. She later appeared in films like Attarintiki Daredi, Brahmotsavam, Hungama 2, and more. She was last seen in the movie NTR: Kathanayakudu in 2019.

Now her daughter is about five months old and now she has shared her cute photos with her daughter. In this, both of them are looking very cute. People are liking it a lot.

Pranitha is an avid social media user and keeps updating her fans with cutesy glimpses of her life.

Sharing the pictures on Instagram, Pranitha Subhash wrote, ‘Celebration of milestones… Monthly Birthday’. His post has got more than 300k likes. People are liking it a lot. People are commenting fiercely.