Porsche Shows Off Its New Off-Road Car the 911 Dakar 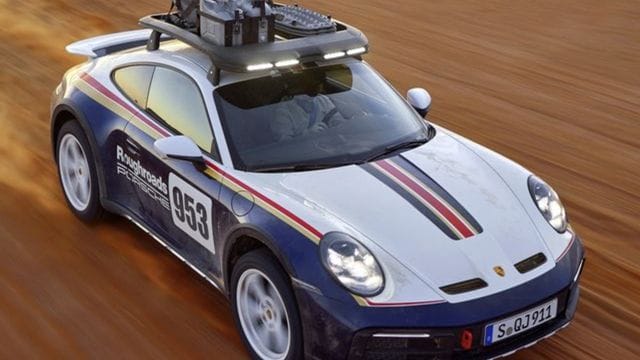 The engine from the Carrera GTS is used in the 2023 Porsche 911 Dakar, with a few adaptations for off-road driving. The center intercooler was removed (for greater ground clearance) and replaced with side intercoolers from the 911 Turbo.

This, combined with a redesigned airbox designed to keep dirt and dust out, results in 473 horsepower and 420 lb-ft of torque for the 911 Dakar. This engine is only available with an eight-speed PDK automatic transmission and the Carrera 4’s all-wheel drive system.

Naturally, as you may have guessed, the suspension setup is the most intriguing part. The two-mode height-adjustable suspension has a ground clearance of 6.3 inches in standard mode and 7.5 inches in high mode, which is very good.

It’s interesting that Dakar doesn’t use air-ride suspension to change its height. Instead, Porsche used the same technology for all four corners that it uses for its front-end lift system. At least, I hope it will turn out to be stronger than air.

The Dakar’s height gives it good ground clearance for a sports car, with an approach angle of 16.1 degrees and a break-over angle of 19 degrees in high mode.

Porsche really worked on the car’s electronics package, because the launch control, traction control, and stability control you want on the street are very different from what you want on dirt or gravel.

The excellent launch control system from the regular Porsche 911 has been tweaked, for example, to let the wheels spin around 20% more. In Rallye mode, the car is set up so that it can do a lot of big, dirty slides. The off-Road mode has a lot more restrictions and is meant for going slowly over rough terrain.

Obviously, if this car didn’t have real off-road tyres, it would just be a tall, black plastic-covered 911. Porsche was smart to hire Pirelli to make the first official off-road tyre that came on a Porsche 911 from the factory. 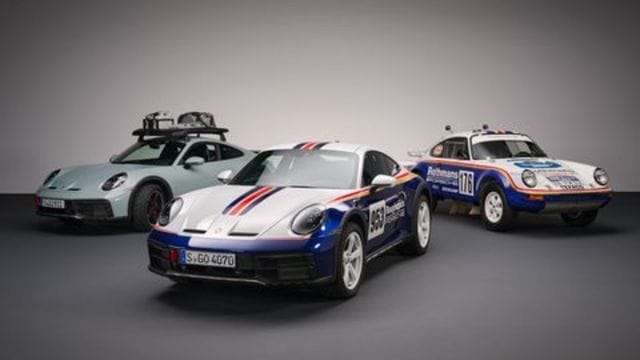 The tread on the tyres is pretty chunky, but they are more like all-terrain tyres than mud terrain or gravel rally tyres. Don’t think that they can only be used on dirt, though.

Representatives from Porsche said that the 911 Dakar drove around the Nordschliefe in the same amount of time as the 996 GT3. That was a few generations ago, but back then, the tyres were also pretty aggressive.

The rest of the car is a lot like the classic 953 rally car. For example, there is an optional Rallye pack that gives the car a throwback paint job that looks like the Rothman’s sponsorship from back in the day.

The colours are the same, but the door now says “Roughroads.” This is a pun and a way for Porsche to avoid advertising an old British cigarette brand on its new sports car.

The Rallye pack also has a great roof basket and a light bar that is built in. The 911 Dakar also has a custom rear decklid spoiler that looks like the perfect place to lay out a rally map and yell at your co-driver for getting you lost.

Porsche has decided that the 911 Dakar is too cool to be made in a regular series, so it will only be made in 2,500 units. The fact that they are limited is kind of a bummer, but with a starting price of $223,450 plus a $1,450 destination fee, it’s more likely that you won’t be able to afford one than find one.

For those of you keeping score at home, that price is just a little bit less than the astronomically expensive GT3 RS, which costs $225,250, and the even more expensive 911 Sport Classic, which costs $273,750.

Due to the Sudden Weather, Is NFL Moved Browns-Bills Game to Detroit?