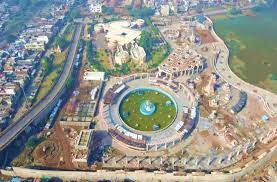 Prime Minister Narendra Modi may come to Ujjain in November to inaugurate the Mahakal Corridor and they will also launch a special Vedic clock.

The work of the first phase of the Shri Mahakal Maharaj Mandir Corridor Development Plan is in the last phase. After the inauguration, this grand area will be opened to the public.

The corridor is being prepared for Rs.752 crores

It is to be known that the Prime Minister will reach to inaugurate the first phase of expansion of Mahakal Maharaj temple, which is being completed for Rs.752 crores, where he will launch the world’s first Vikramaditya Vedic clock and Vedic app during his program and he can also address the public meeting.

As soon as the first phase of works is completed and opens from the fourth arm of Harifatak Bridge, as soon as the devotees reach Triveni Museum, they will have a supernatural vision of Baba Mahakal’s courtyard. The work of Theme Park, Ghat and Deck Area, Nutan School Complex, and Ganesh School Complex has been completed.

Under the Mahakal Corridor, a 200-meter-long walkway has been made for suitable walking. It has a 25 feet high and 500 meters long mural wall. Not only this, 108 Shivstambhas have been built with different postures of Shiva, which are spreading different shades. Lotus Pond, open-air theater and lakefront area, and route for e-rickshaws and casual vehicles are also almost completed. Clean water will be filled in the lake of Rudra Sagar and it has been ensured that dirty water is not found in this lake at all.

A sitting arrangement has been made on the banks of Rudrasagar. A surface parking zone with a solar system has been created in front of the Triveni museum where 450 bikes, cars, and buses can be parked. Solar panels have been installed on the roof of the parking stand to generate electricity. Mahakal Dharamshala and Anna Kshetra are being constructed nearby here. Neelkanth forest is being constructed.

127 huge idols of various deities, including Lord Shiva, made of stone and fiber rain force plastic have been installed.

Prime Minister Narendra Modi can also launch the world’s first Vikramaditya Vedic clock and Vedic app during the tour program of the city of Mahakal. The special thing about the clock is that the clock has been prepared by a person from Lucknow according to the time of the Greenwich method and the Hindu calendar, which will be of 30 hours Instead of 24 hours.